Our second to last day was action-packed. The first thing we did was view an exhibition at the Seok Juseon Memorial Museum at Dankook University. 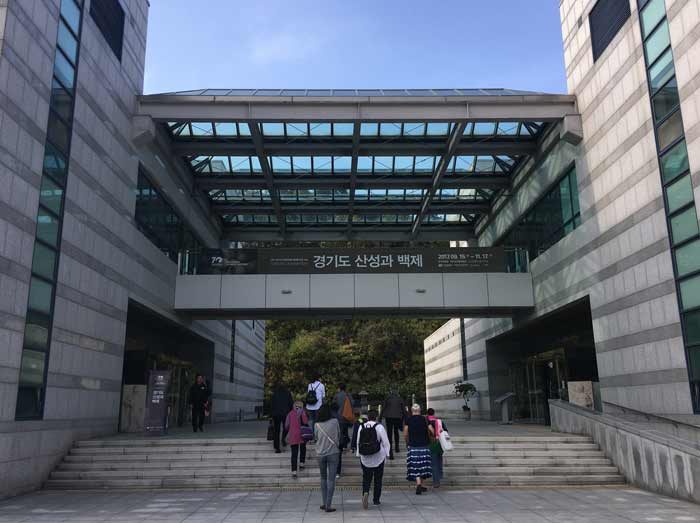 Just to put you in the mood for what the museum has to offer, in the foyer there are cut-outs dressed in traditional Hanbok for photos ops. but you need to line up better than I did. 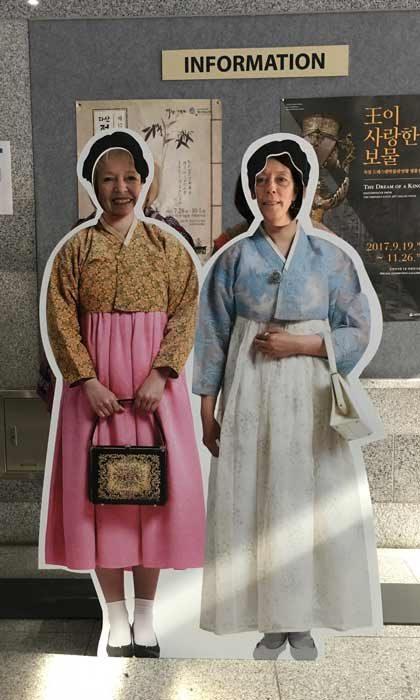 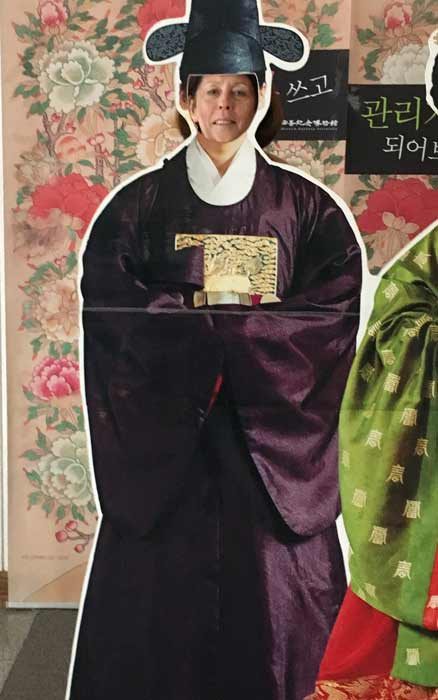 The museum has an Archeological History Hall and Folklore Costume Hall. We toured the folklore exhibit with Myung Eun Lee, an employee of the museum. She was wonderful, providing fascinating information about the exhibits rather than the dry facts you so often hear. With so much to see and learn, I can only provide some of the more interesting highlights. 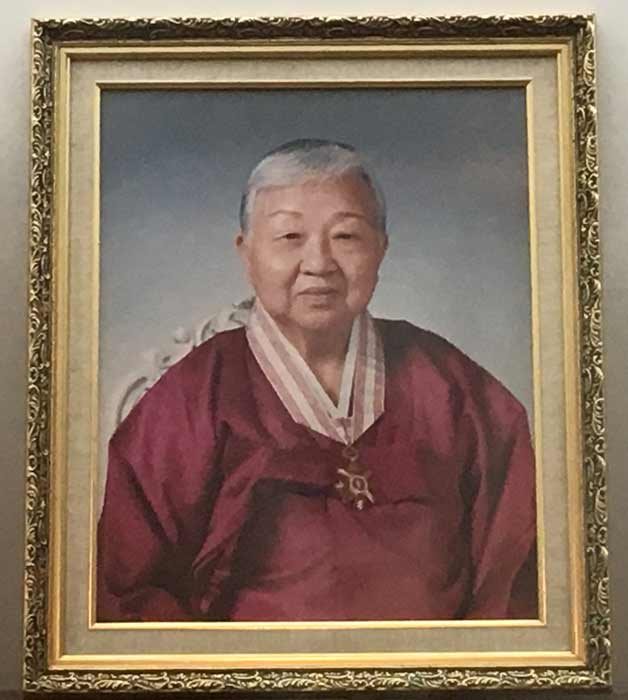 There are now more than 40,000 items, five exhibition rooms, and state-of-the-art storage rooms for safe preservation of artworks. In addition, the museum conducts research and social education.

With all of us being needle artists of some type, there were many pieces of beautiful embroidery to admire. 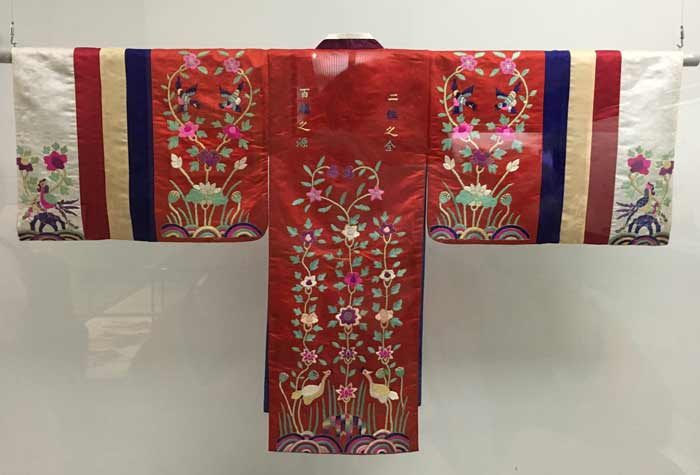 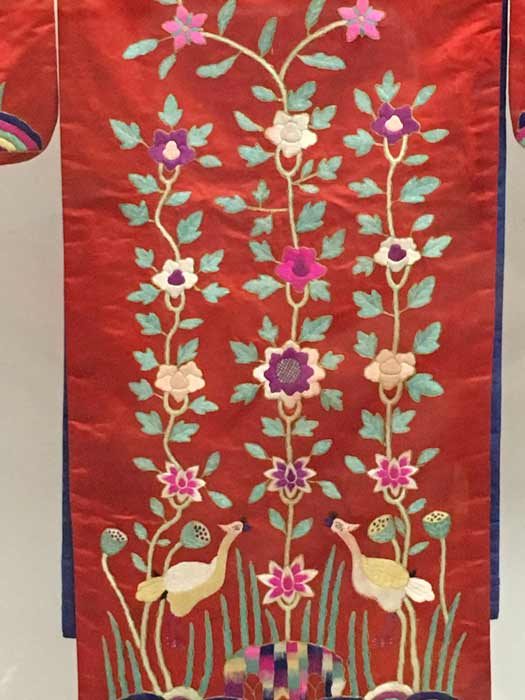 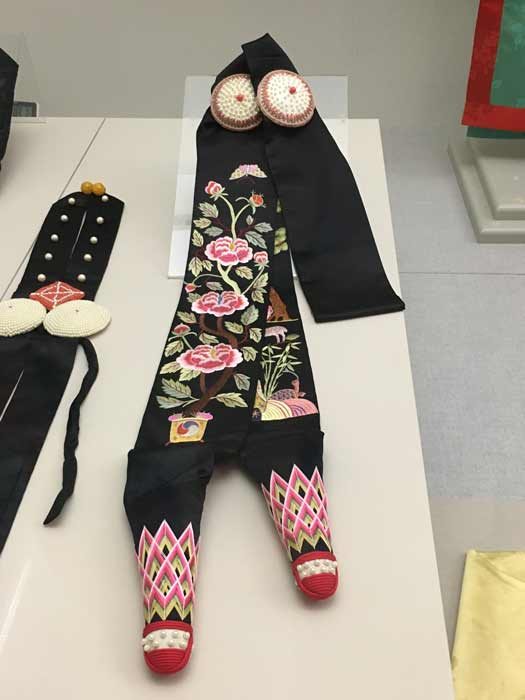 Koreans have sported some intriguing head wear over the centuries. This ornate floral head piece was worn by a bride during her wedding. 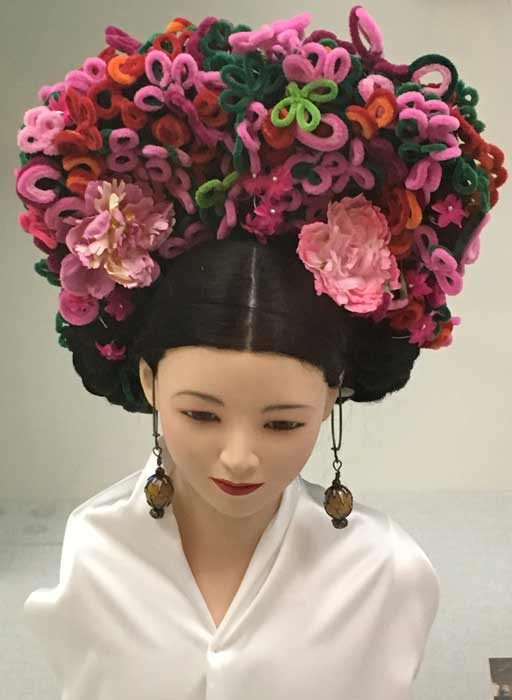 This most unusual sculpture was used to support a wooden wig. 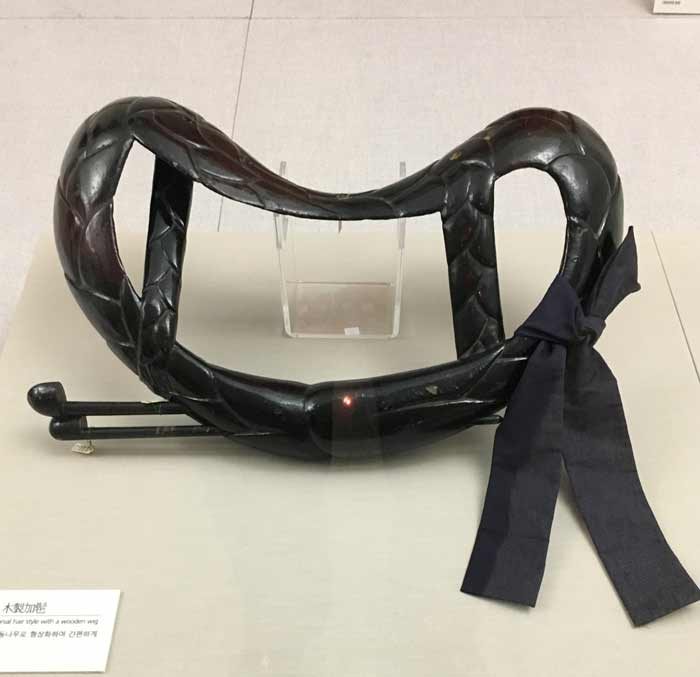 Used with a wooden wig

A women’s cozy winter hat which would clearly keep the chin warm. 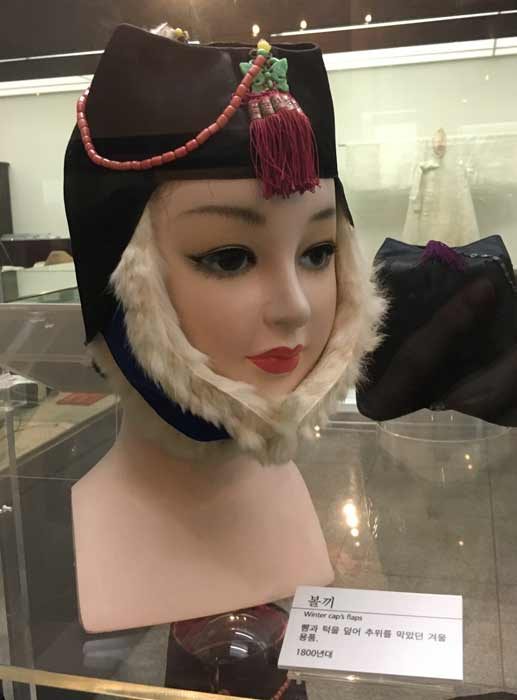 This was a women’s veil. I have no idea how she could see. 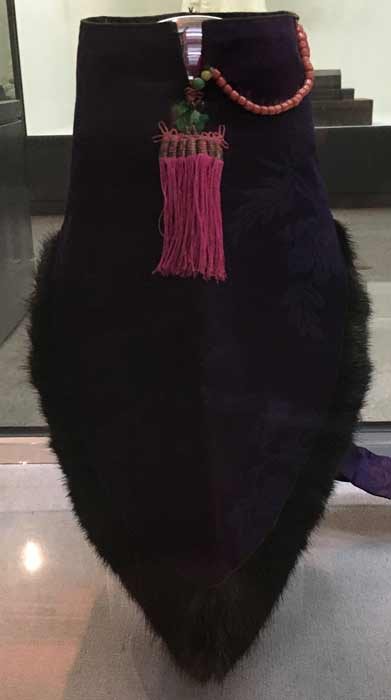 This is a cloak with a shaped veil women wore when going out to hide the face.

When men became a successful State Examinee they wore this headgear. 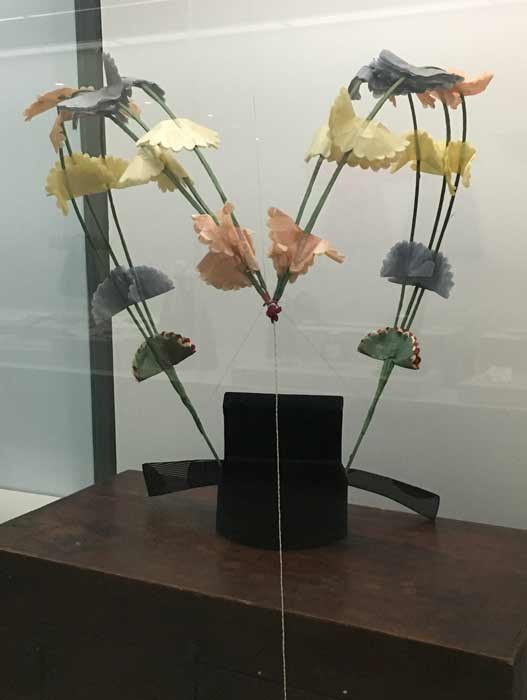 This is a man’s wedding garment. 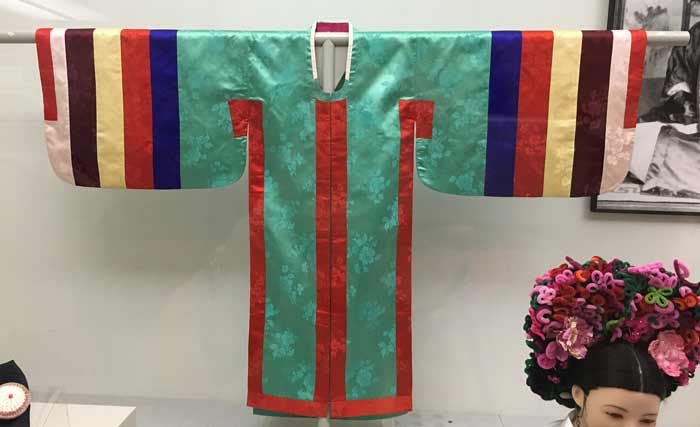 In the eighteenth centuries these Jeogories or jackets became quite controversial as they became shorter and shorter ultimately falling short of the chest line, revealing women’s breasts. See how tiny the Jeogori is in the upper left. 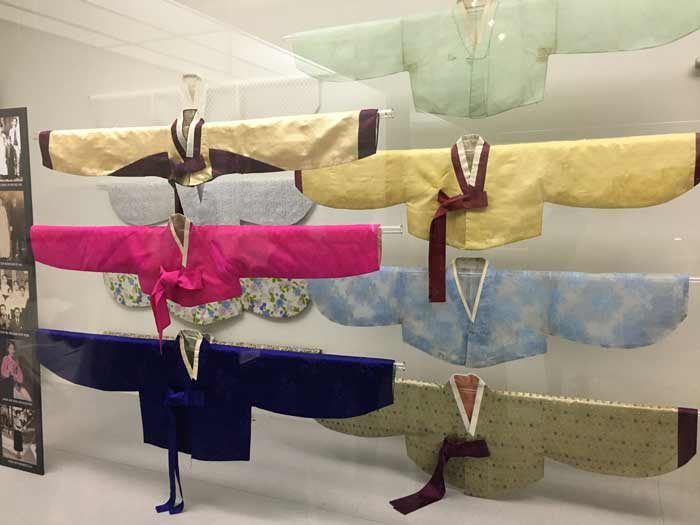 The museum has a wide collection of children’s clothing. Bright colors were meant to ward off evil spirits. 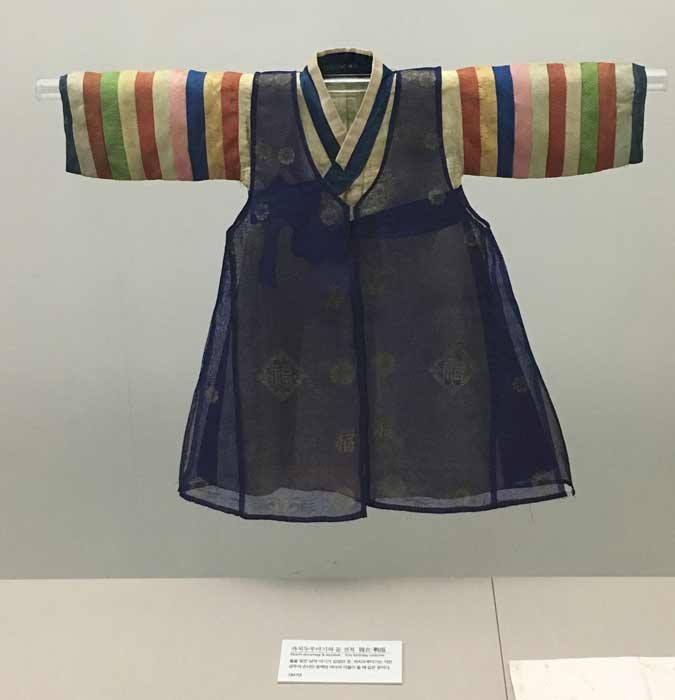 Children’s clothing was decorated with shapes of plants or animals that had positive meanings, which were wishes for a long life filled with riches. 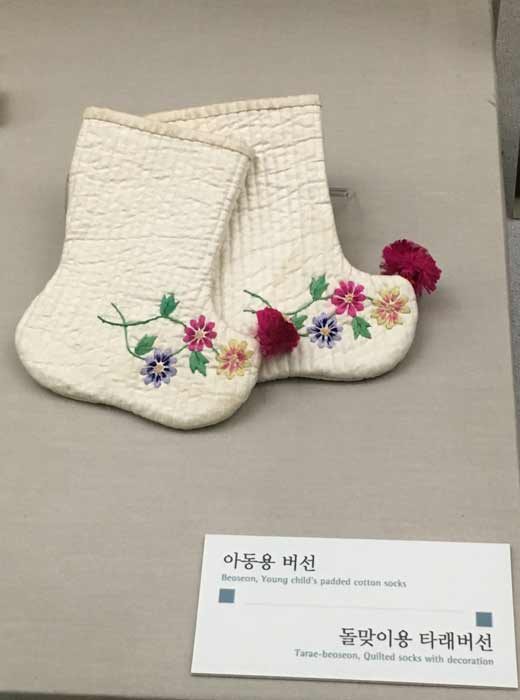 I’ve written previously about the knotted work popular among Koreans and the workshops we attended. Here are just some antique examples we saw at the museum. 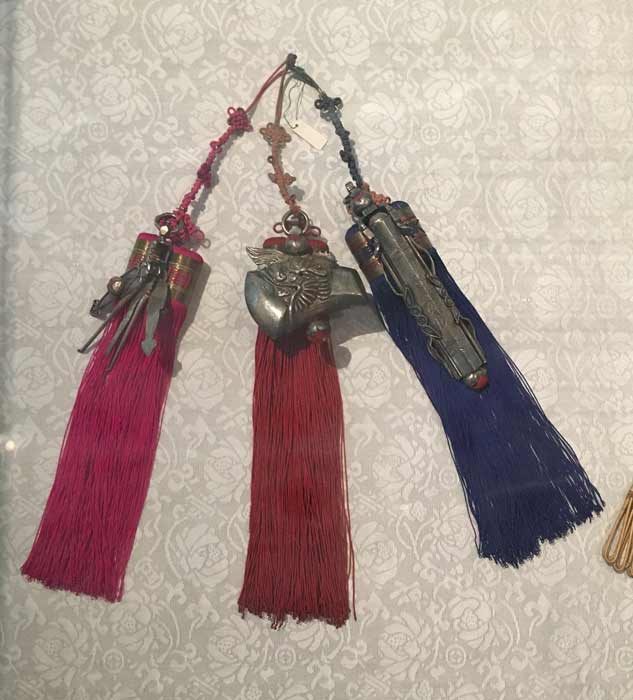 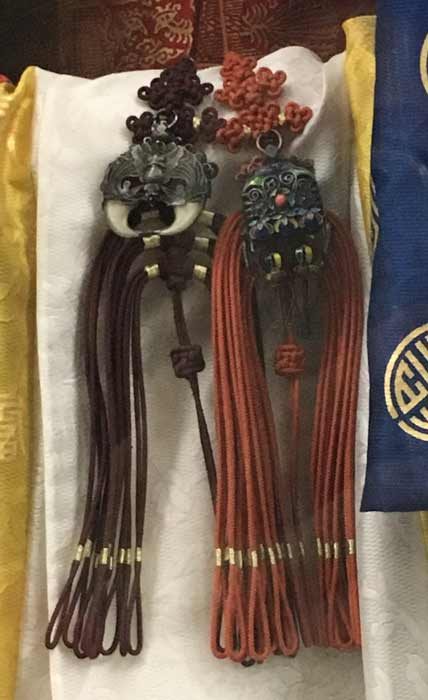 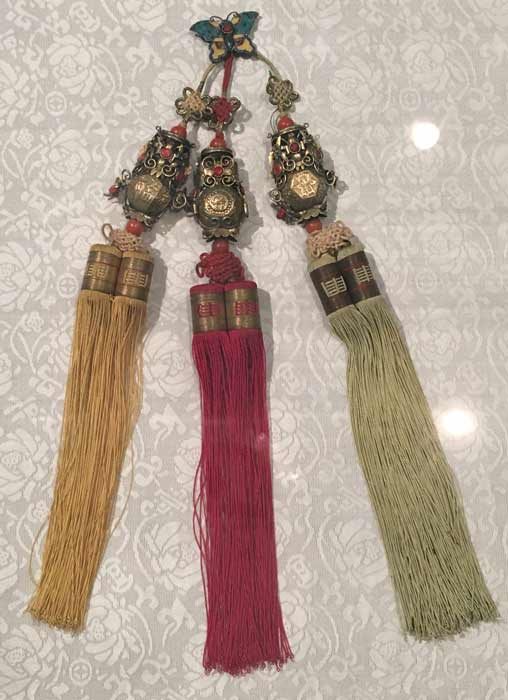 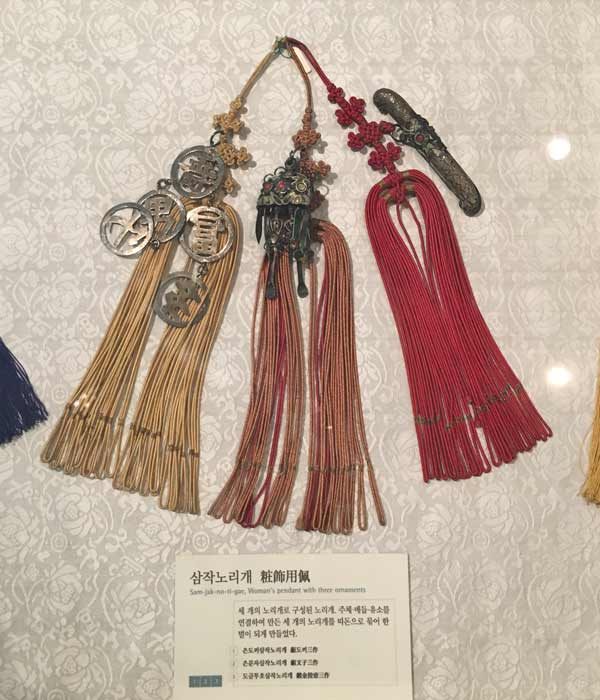 You see rectangular pillows whose ends are embroidered in many shops around Seoul. Here is a stack of antique pillows. They do not sound very comfortable as the pillows contained wooden forms or were filled with pebbles. 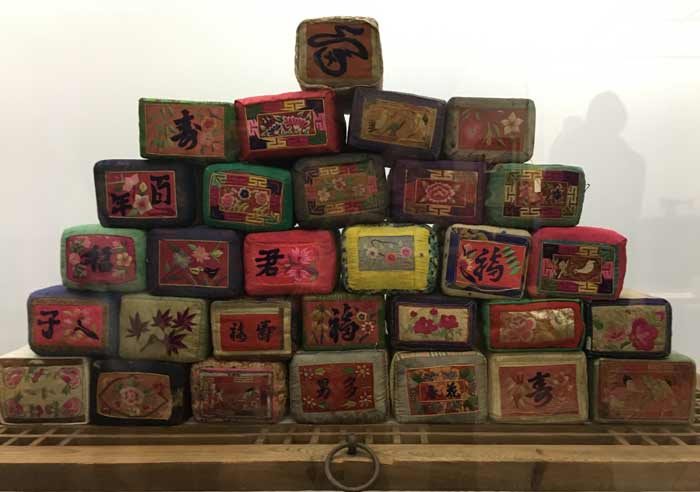 In general, when we think of mummy’s, we think of Egypt. So it was somewhat surprising to learn the museum has a section devoted to the discoveries of mummified remains and what they tell Koreans about their history. These remains are discovered when ancestors’ tombs are relocated. In 2001, a young mummified boy from the first part of the 17th century was discovered in Yangui-gun. He was wrapped in pieces of his father coat called a Jungchimak and his mother’s coat called a Jangot, as well as numerous cotton cloths, in fact, so many there was almost no empty space in the coffin. The reason for this is that people didn’t want to show the ancestor’s dead shabby body to their descendants and also thought their ancestors would be happy in their after life when their corpse was not moving in the coffin during the funeral. 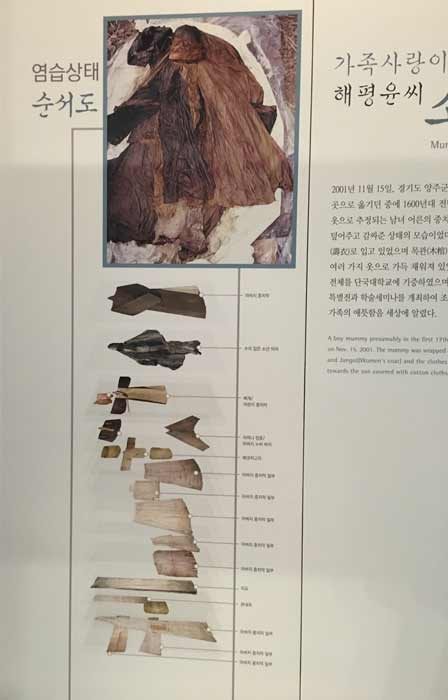 A rendering of the family is shown along with the timeline and the mummified child estimated around age five. 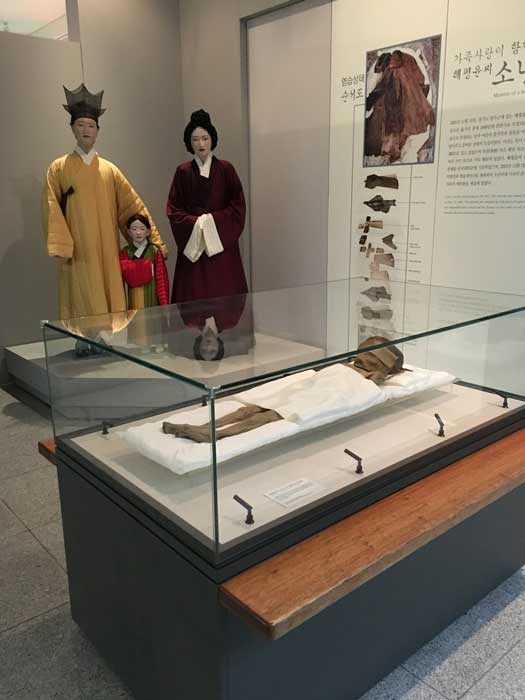 A jacket found in a tomb shows extensive stitching. 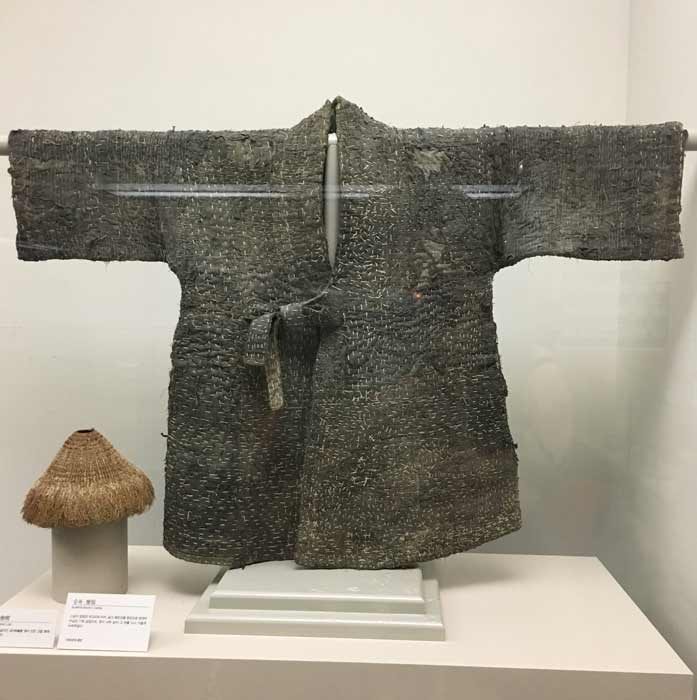 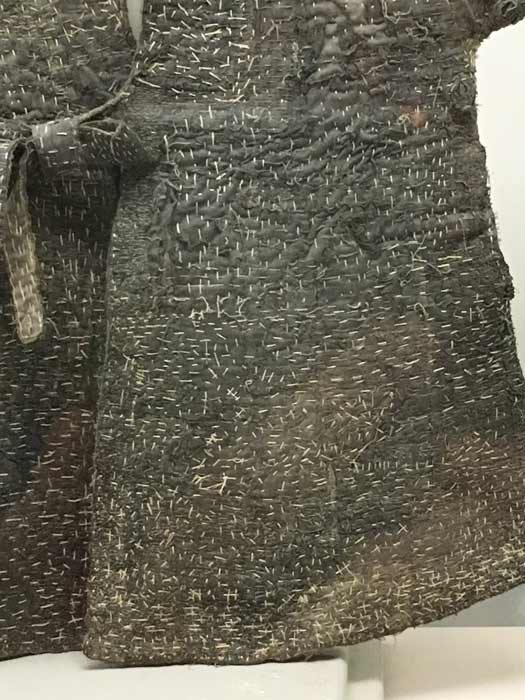 The second half of this day was spent at two museums filled with fabulous art: weaving and embroidery. I’ll write about them in the next post.