Our first stop this afternoon was the Museum of Maga located in a beautiful setting made even lovelier by another sunny day. There were several installations and pieces of art on the grounds. 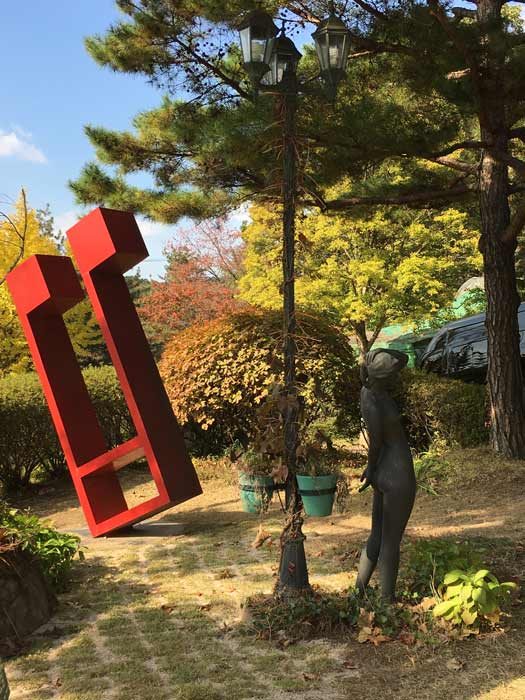 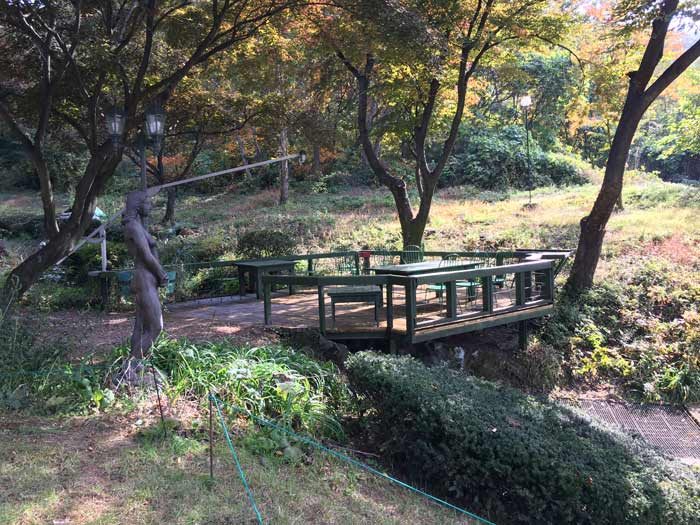 Notice the silhouette mounted on the brick. It’s a life-size figure of the museum director, Burn-Soo Song, who is also a renowned artist. 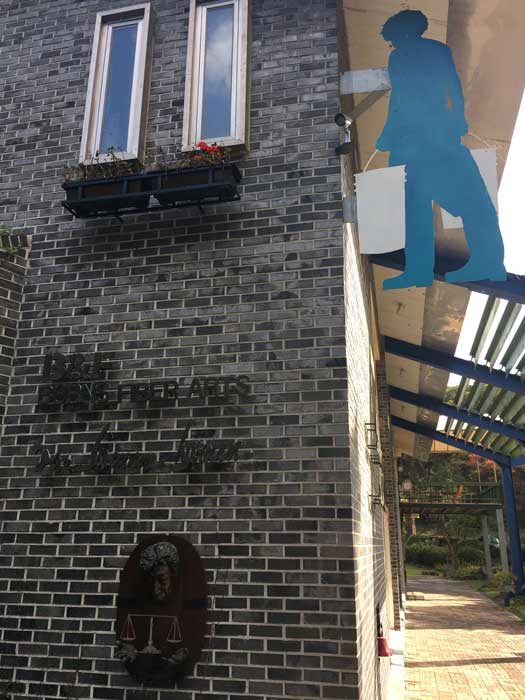 Here are Myrna and Diane. Note the second silhouette of Burn-Soo Song posed outside his studio door. I love the yellow boots. 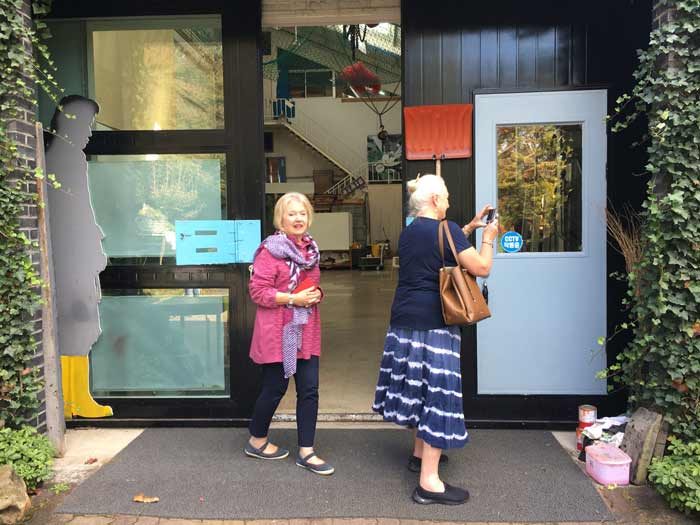 Here’s what the silhouette looks like from the interior of Song’s studio. He looks as if he is poised to open the door. 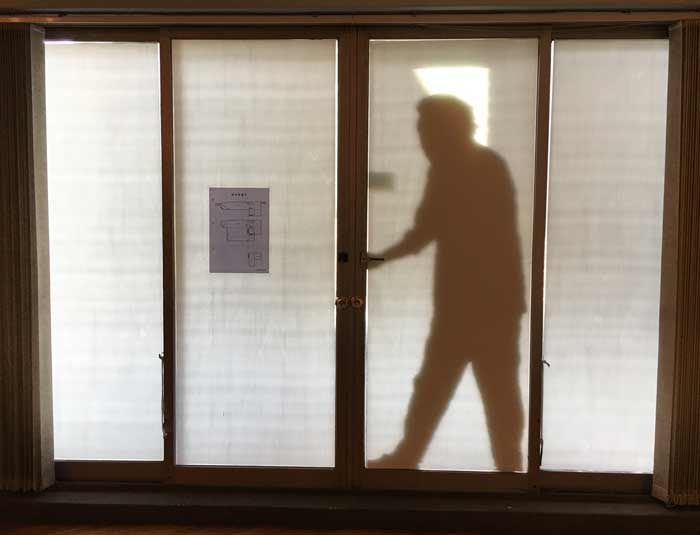 Here is the studio interior, a huge space with tall ceilings. 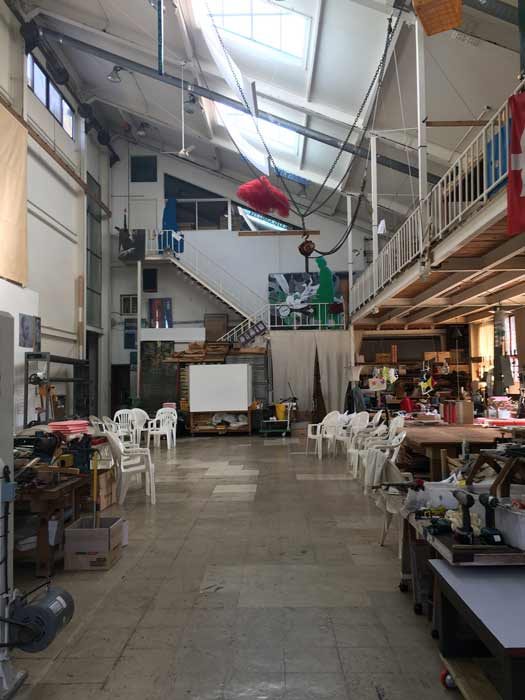 Here is Burn-Soo Song himself. He projected such a positive spirit. He studied in Paris which is where he learned weaving. I don’t speak Korean, but because he speaks French I was able to have a conversation with him about his work. Cool. 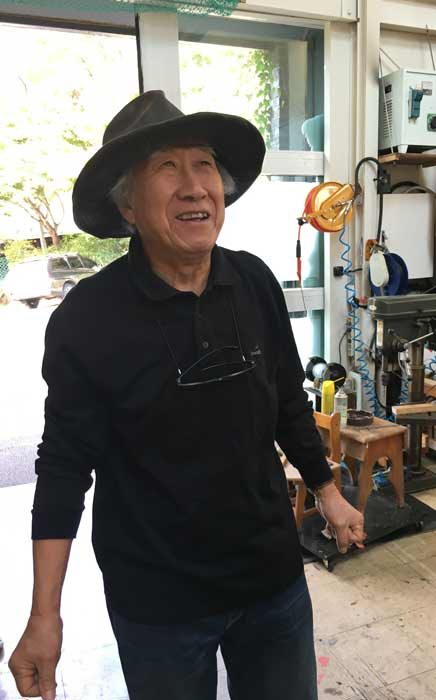 Song’s work is featured on the second floor of the museum. I wish I could have better photographed his art, but it’s enormous, around eight feet in height. Plus, he hangs his art so the lower edge is at eye level, which gives the work the feeling of looming over the viewer, which I found so effective. This is one of his early works. 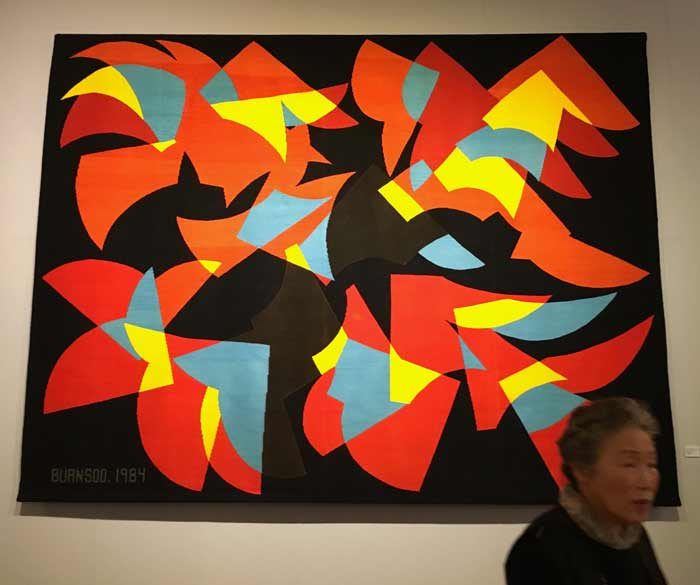 The rest of the works were black, red, and/or gray. Very graphic and forceful. 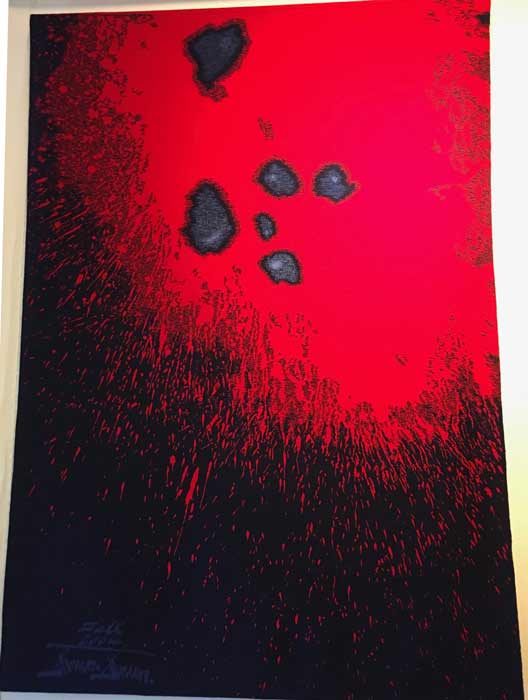 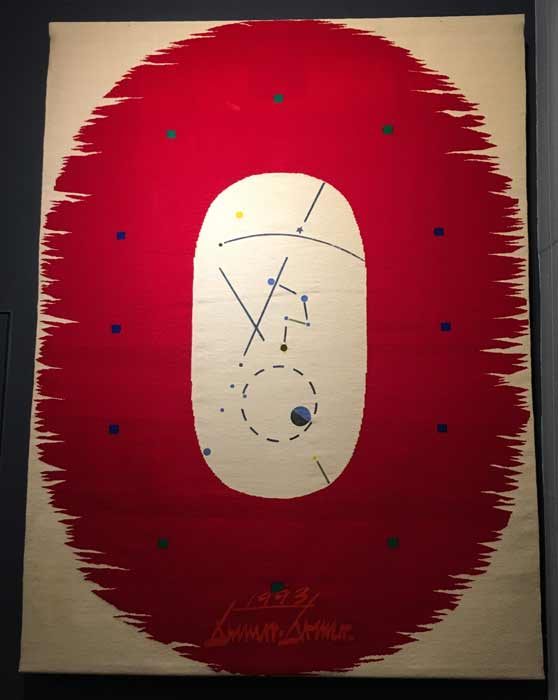 The shadows and dimensionality are woven in. They are not caused by lighting. Song explained that it took time before he gained the skills to create this effect. 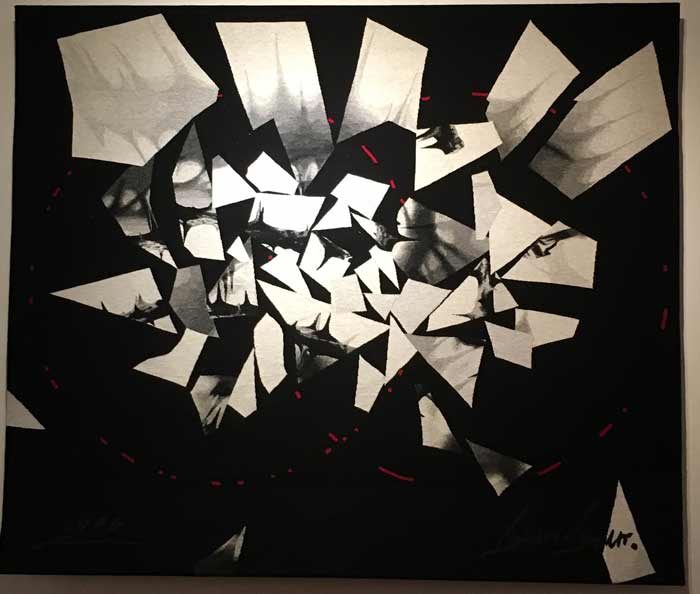 Here is a detail shot to show his work in-depth. 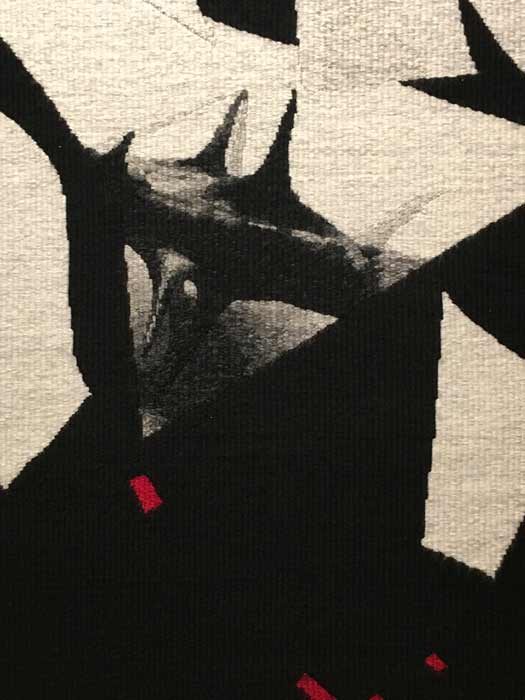 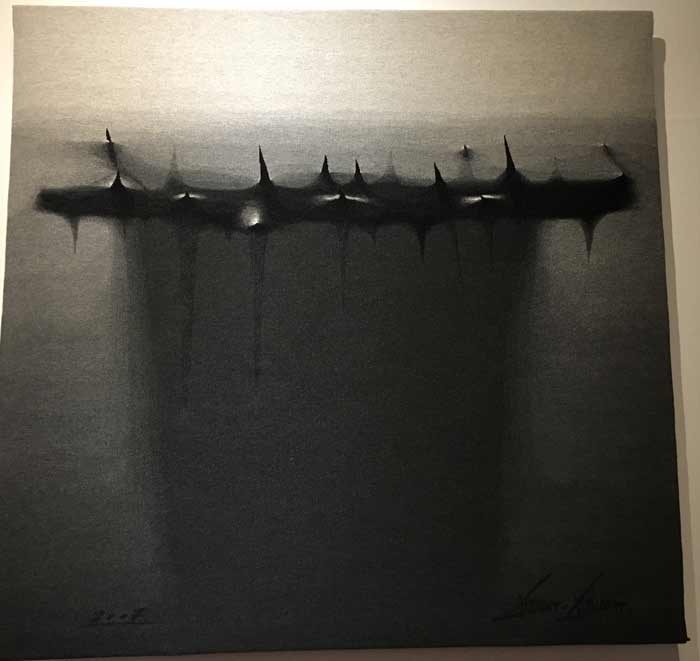 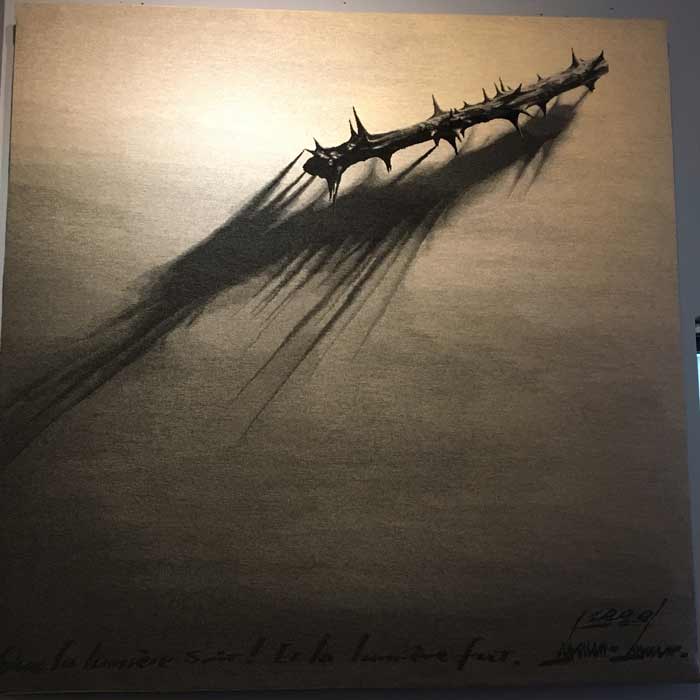 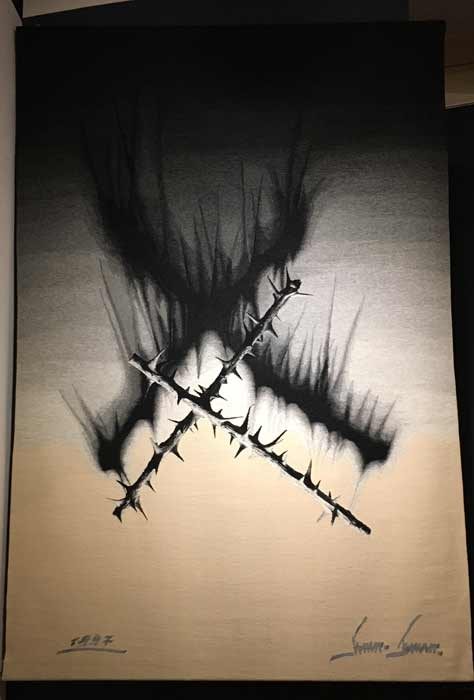 The first floor featured calligraphic paintings by Chul-Hong Kim. Here is an example of his geometric art. 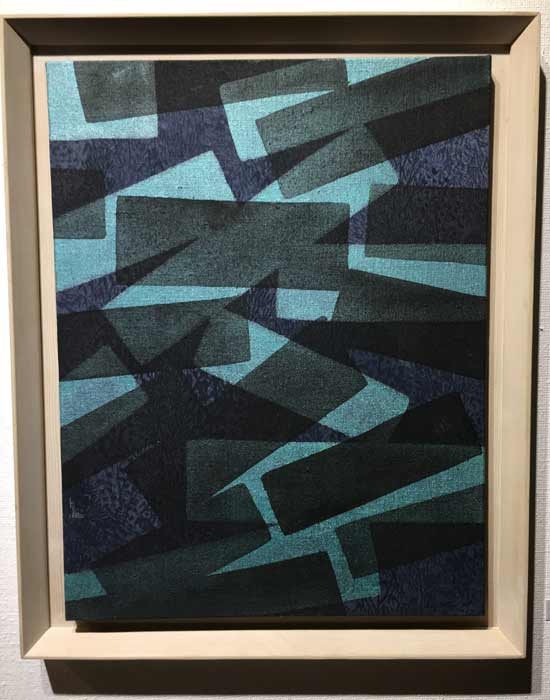 Other pieces had a mysterious and ethereal quality. 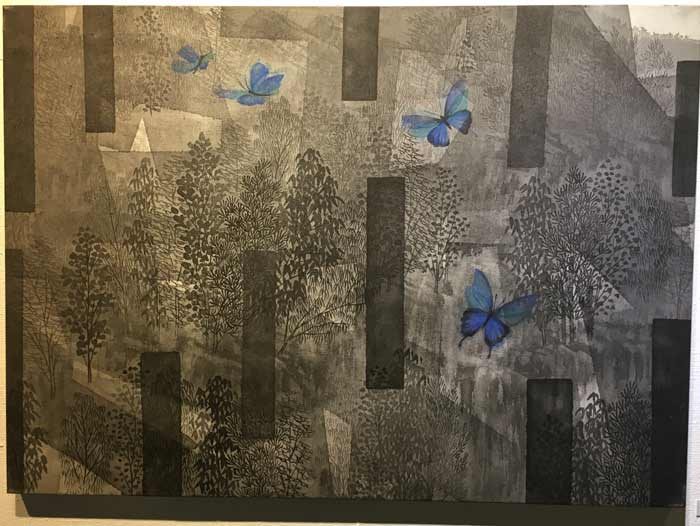 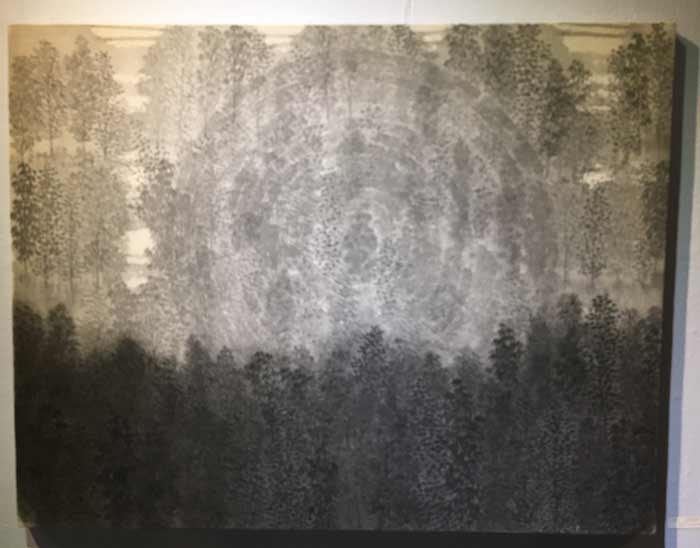 After viewing the amazing art of Song, we journeyed on to the Yewon Silgrim Art and Culture Foundation to view the embroidery and fiber art of Son In-Sook who is also the museum director. Son has produced silgrim (thread art) reproductions of traditional Korean paintings, works inspired by Buddha and the Bodhisattva Gwaneum, and original and contemporary work inspired by Korea’ s natural beauty. A lustrous light reflects off the artworks. The contemporary embroidery looks like photographs or paintings the work is so detailed and skillfully executed.

Son’s lifelong passion and inspiration for embroidery and silgrim began at age 10 when her mother taught her to embroider. Over 50 years later, Son continues to paint with thread works with other artisans to help her complete her artistic vision and still confers with her now 90-year old mother. Son told our group she needed another fifteen years to finish her life’s work.

I so wish I could show images of Son’s embroidery, which is the most impressive I have ever seen personally, but she did not allow photographs. The only artist or venue where we could not photograph. Dang! Nor does Son have a website. But here’s an article in English with some photos of her and her work.

On the positive side, she did let me photograph her Maedub. You will recall I showed a photo of the knotted necklace I made during our first Maedub workshop. You can see in the following photos the complexity of her work combined with embellishments.

For our second Maedub lesson, we learned how to make woven knots. First we wove around one of our fingers for a large knot then we went smaller creating knots around a pencil. Here are mine. 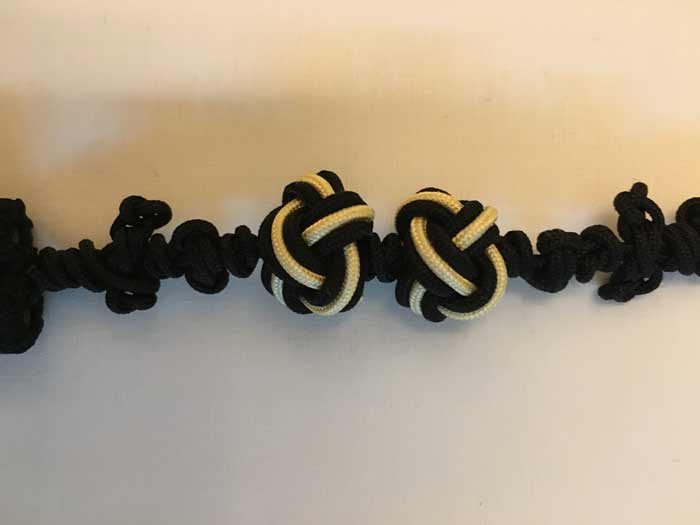 The knotted cord I made and attached to a purchased tassel, which are readily available.

Here is Maryse holding up her tassel with knots in red and black. 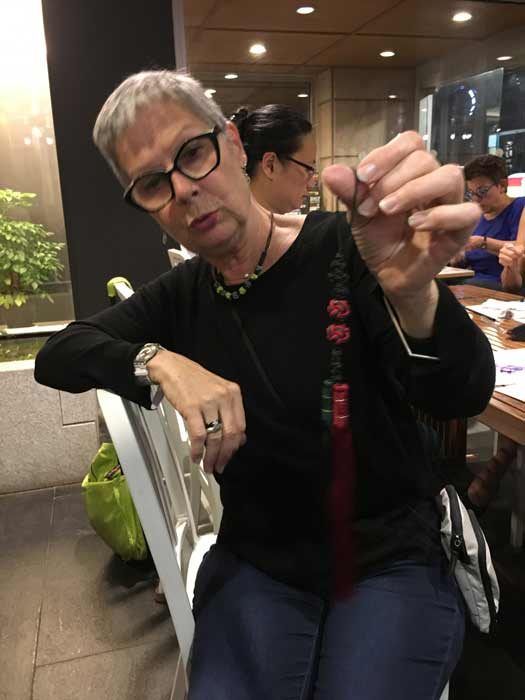 The last day of the trip was our second free day. Maryse, Diane, Ping Ting and I had the opportunity to go to a wholesale distributor of Maedub supplies arranged by Youngmin Lee. It was a challenge to choose among so many colors, sizes and embellishments. But what a great ending to a great trip. 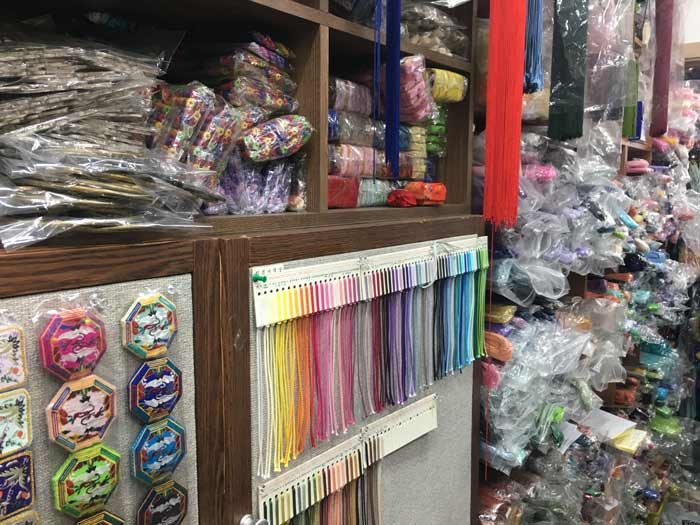 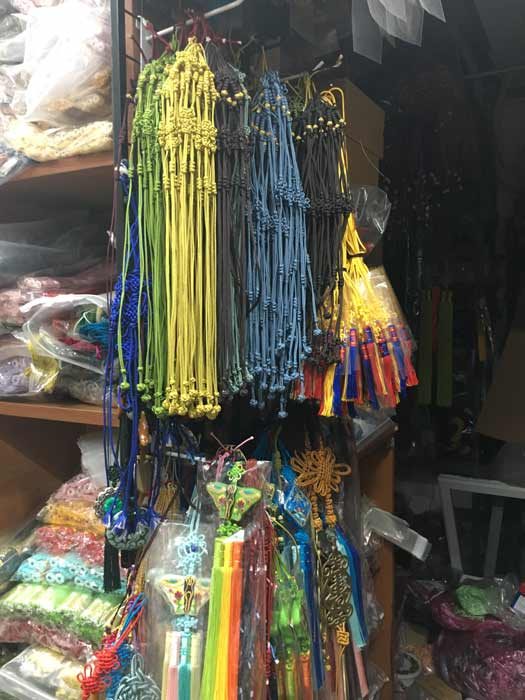 Youngmin, Lissa, and Mirka are offering another trip next October with a similar itinerary. If you are interested, you can contact Mirka at mirkaknaster@gmail.com. I highly recommend the experience.