Clark County Quilters had the final exhibition of the World Heritage Sites International  Challenge among the show’s special exhibits. I had no idea what any of the quilts looked like other than my own and didn’t know what to expect. Wow! I was impressed. Ninety quilts thematically linked make a wonderful display. While there was a range of skill levels among the makers, many of the quilts showed just how much thought and effort were put into them. It was so interesting to see how three people from three different countries interpreted a site. I did not take photos of all of the quilts but rather those of people I know or my favorites. Some of the heritage sites were new to me, but I found the descriptions provided by the makers informative. Enjoy the images. I should mention, the top row is done by Americans, the middle row by Japanese, and the bottom row by Korean quilters. Here we go!

I took individual photos of the most impressive interpretations. The one below is by a Japanese quilter. I know nothing about this Greek site, but what visuals. I want to know more! 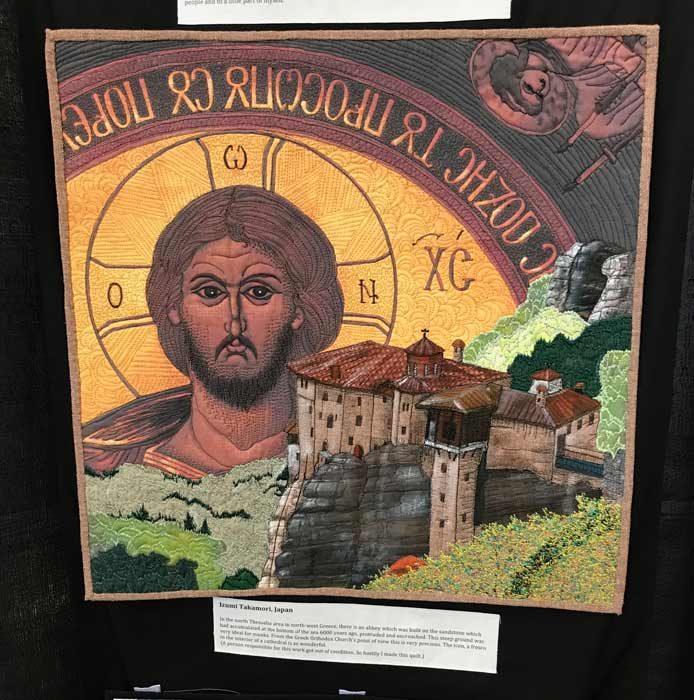 Nemrut Dag is in Turkey and Jeju Island in Korea. 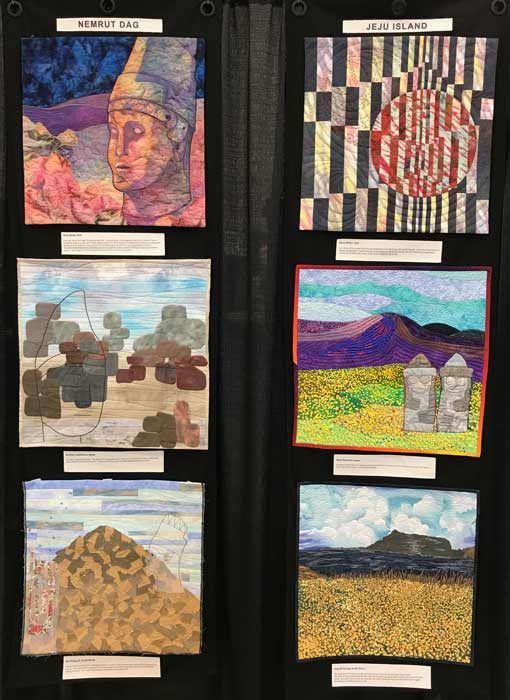 The first row celebrates the Grand Place in Brussels, Belgium and the second row honors a traditional Korean dance. Although World Heritage Sites appear to be about places, the title now includes other types of traditions. For example, French cuisine has been named among World Heritage Sites. 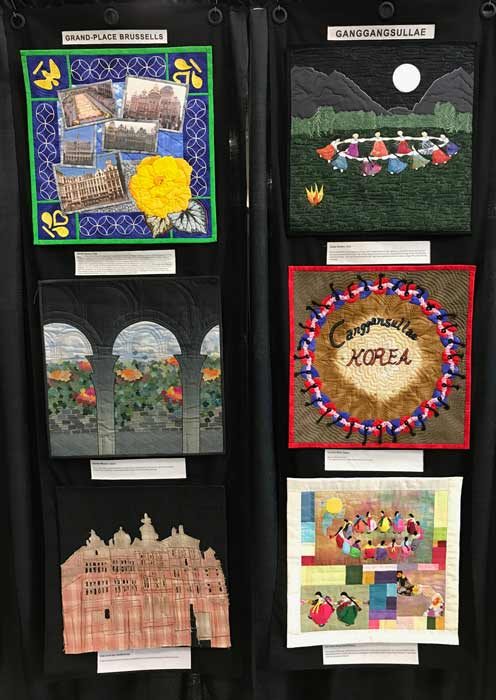 The Statue of Liberty needs to introduction to Americans.

Yellowstone National Park is one of my favorite places in the world. When I lived in Billings, Montana, we visited the park a number of times. I always recommend to friends to go in the winter when there are fewer visitors and you can see all of the animals up close save the bears who are hibernating.

This interpretation by a Japanese quilter may be my favorite in the entire exhibit. She really captures the essence of the park. 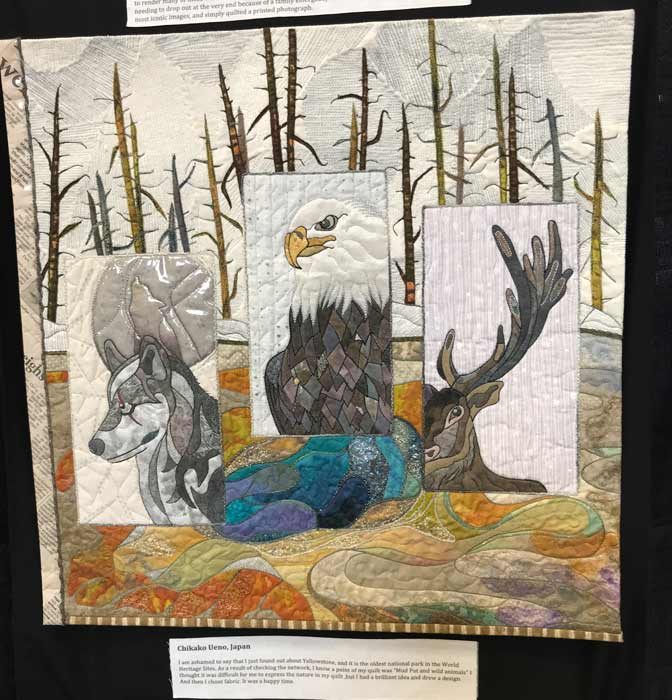 Ha Long Bay is in Viet Nam, while Yakushima is located in Japan. 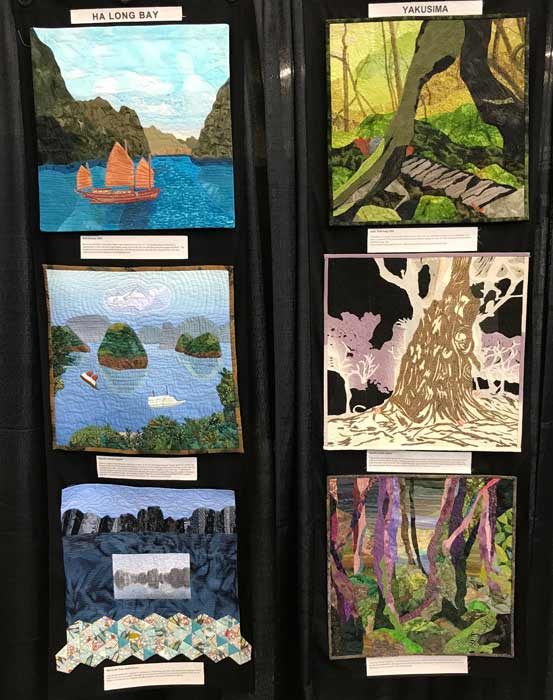 The Grand Canyon is obviously in Arizona. Ancient Nara was the capital of Japan during the 700’s. You will notice a number of the sites are Korean or Japanese. The organizers from these countries selected the sites for the challenge and thus chose places more familiar to them than to us in the west. 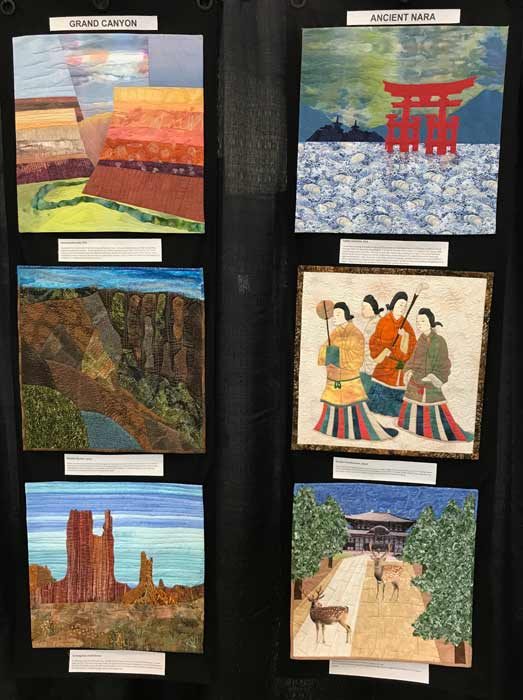 This is another heritage “site” that honors something other than a place. I love Karan Brooks’ quilt (the top one). So charming.

Somehow I didn’t get all three quilts of Venice, but this is a lovely and interesting interpretation the way the maker incorporated photo transfer along with appliqué and line work. 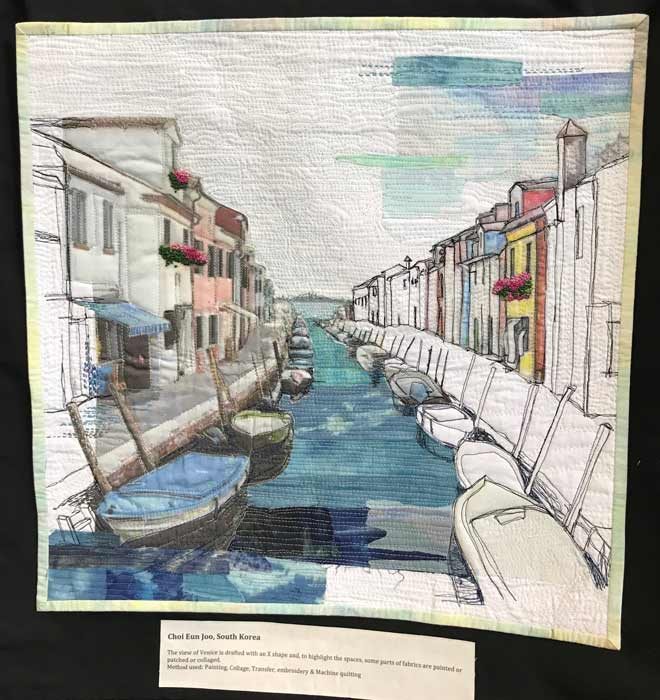 Last but not least is the Cathedral of Chartres, France, which I did. I had considered focusing on the famous Rose Window and decided that might be obvious. Instead, I did an embroidered and inked image of the building itself. Imagine my surprise when I saw the Japanese quilter had done the Rose Window. It was as if we were in sync. I love that her quilt followed mine.