The “Town Musicians of Bremen” is a well-known tale in the US. It was one of my favorites from childhood. I’ve always loved animals and was the tale I asked to create if my first choice was taken. While there is more than one version, here’s the one I know recall. Four older animals–a donkey, a dog, a cat, and a rooster–have outlived their usefulness on their farms and been thrown out by their masters. The set out together for Bremen (Germany) to live freely and become musicians. On the journey, the see a lighted cottage with four robbers inside. They stand one on top of another and make a racket which scares the robbers away. The animals go inside, eat a good dinner, and settle in for the night.

Later on, the robbers return. One investigates. He sees the cat’s eyes shining and thinks they are coals glowing in the fire. When the robber tries to light his candle the cat scratches his face with her claws, the dog bites him on the leg, the donkey kicks him with its hooves, and the rooster crows while chasing him out the door.

The terrified robber tells his compatriots a horrible witch scratched him with her fingernails, an ogre cut him with a knife, a giant clubbed him and a judge screamed at him from the rooftop. The robbers race away from the cottage never to go back, while the animals live there happily ever after.

Sheila Steers is the creator of the quilt honoring this fairy tale. She explains her design process, “The ‘Musicians’ were machine-appliqued onto a hand-dyed background. The off-kilter frame contains elements of the fairy tale: the robbers chased from the cottage the animals want to call home, the cottage itself and the village that discarded the animals. Four conductor poses add a bit more whimsy. The blue units came from one fabric and it was a nice challenge to use several aspects of it in creating the frame. 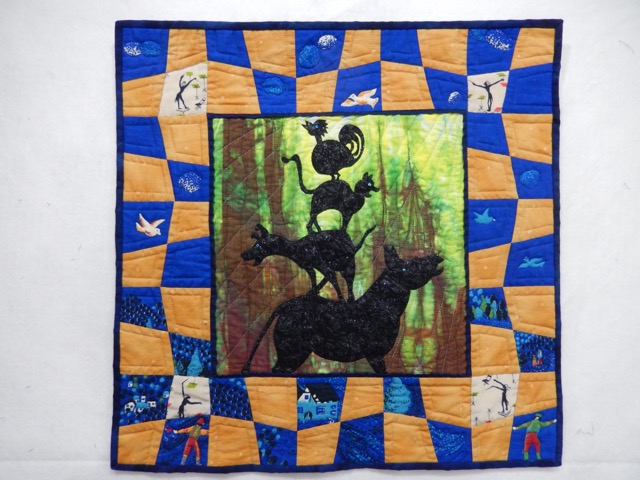