Artist Deb Sorem created the quilt based on this folk tale. She tells an interesting story behind her reason for choosing “Talkative Turtle” and how she designed it.

“Since I enjoy reading stories with my grandchildren, I thought it would be interesting to become familiar with a new fairy tale and to illustrate it in “storybook” fashion. I decided to adapt my version of the fairy tale to lessen its gruesomeness and modify its geographic location. I altered the location of the story to take place in the Northwest area of the United States where I live and incorporated the mythology and art of the Northwest Indians by including the voices of the wind and mountain, plus stylized geese and turtle.”

This is the tale:

A talkative turtle overheard two hunters say they were planning to catch turtles the very next day. When the hunters left, the turtle asked two cranes to help him escape. “Beautiful white birds,” he said, “if you hold a long stick between your beaks, I’ll close my mouth tightly in the middle of it, and then you can fly up and carry me to safety.”

“Good idea,” said the cranes. “But for the plan to succeed, you will have to keep your mouth closed tightly on the stick and you must not say a word!” The turtle agreed, and biting on the middle of a stick held in the beaks of two birds, off he was carried.

When the birds were high in the air with the turtle dangling down from the stick, some people on the ground looked up at the strange sight in the sky and said, “What clever birds! They figured out how to carry a turtle!”

The proud, talkative turtle cried out, “It was my idea!” and fell tumbling down to earth.

Notice the wind in the upper left corner and how beautifully Deb designed and executed the birds. They have a real Pacific Northwest flavor. 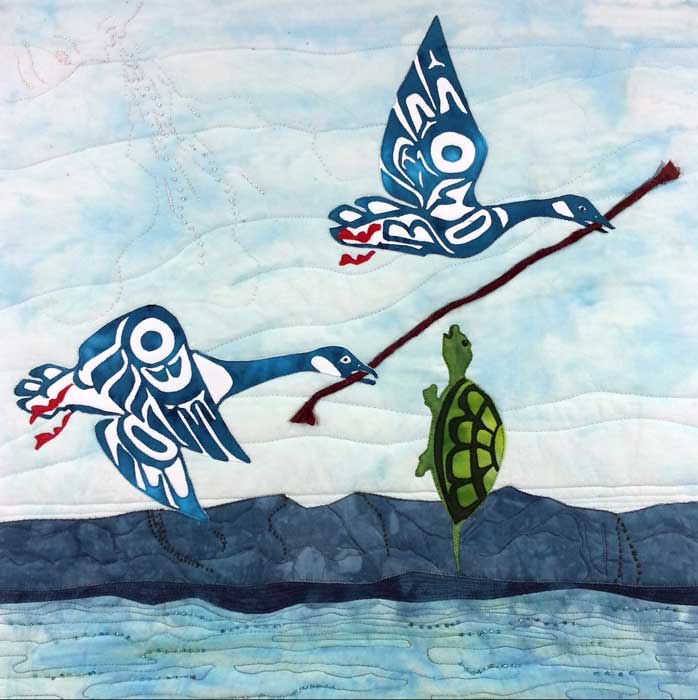