At the Stitches in Bloom Show last week I hung a small piece next to my featured artist piece titled “Z is for Zinnias, C is for Cosmos.” I completed the small piece probably twelve years ago in a workshop given by Richard Box in Oak Harbor, Washington. I thought viewers would find it interesting to see how the same fiber work can be interpreted using different techniques. Interestingly, what many viewers noticed was that I hadn’t used tulle to hold and stitch the myriad number of fabric bits into place.

Richard’s process would be familiar to quilters if I said he used “snippets”, which was a popular technique several years back. But Richard had been using fabric bits as the basis of his work for many years prior to the advent of Snippets. To create his art, he glues fabric bits to a burlap base. He free-machines over the surface of the fabric bits, blending them together, changing his thread often. Next, he adds hand embroidery, using various weights of yarn and fibers. And–he free-machines again, blending the hand stitching into the piece. I have greatly admired the strong movement and texture in his fiber art since I first discovered him when I lived in Montréal, Québec in the 1990s. The bookstore near my home had a terrific fiber art section, with the books all coming from England. I own several of his books and highly recommend them. They are a feast for the eyes.

When he came to the US to teach, I was excited to take a course from him. This one was called “Cut, Stitch, and Whizz.” He’s since changed the title to “Picture It in Collage and Stitch” since we explained the difference between the English and American meanings of the word whizz. I’ve also attended his 5-day workshop called “Drawing for the Terrified”, and I was, although I’ve since gotten over it. Unfortunately, I don’t believe he travels to the US any longer to teach. 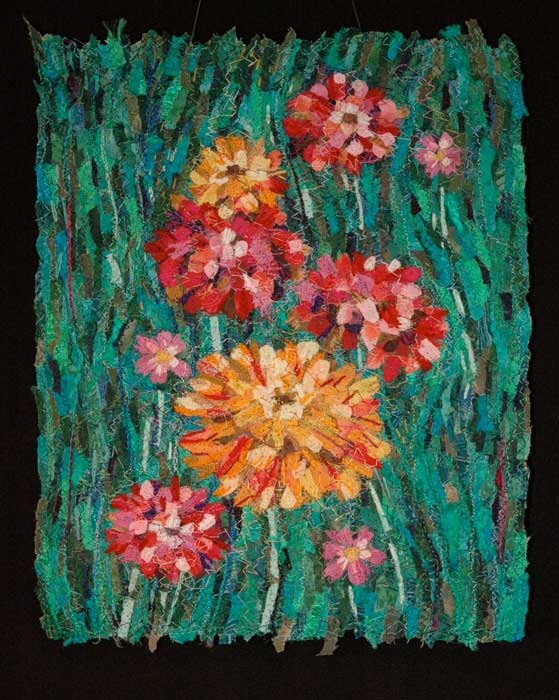 “Z is for Zinnias” a la Richard Box 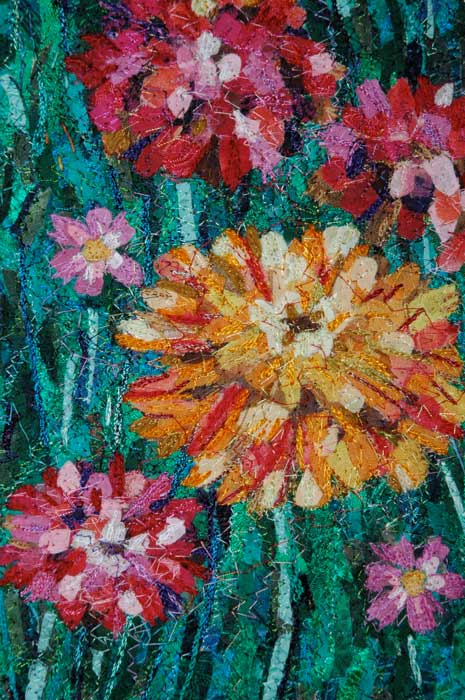