I’m certain when everyone sees the words “Cat Woman,” they immediately think of her arch enemy Batman and Marvel Comics. Surprisingly, there is a fairy tale featuring another Cat Woman. The reference I found shows the tale originating in Greece, but as I’ve discovered with fairy tales there are variations in cultures and countries worldwide. In the tale, there is a man with a beautiful cat. He says aloud, “If you were a woman, I would marry you.” The goddess hears his words and changes his cat into a woman. The couple marries and lives together quite happily, until one evening a mouse scurries across the floor and the woman pounces on it and eats it. The husband is appalled. The goddess sees what happens and realizes, “I can change the outer appearance of a creature, but to truly make a difference, I must change its inner character first!” And she changes the woman back to a cat.

Cynde Pakros created “Venus and the Cat”. She says, “I think everyone can relate to the theme of dual nature. As youth we often struggle to find our sense of self by trying on the hats of different personalities or trying to meld in with various cliques. We try and fail to “be ourselves” until, ultimately, we own our likes and dislikes and live life on our own terms as our true self. I grew up loving mythology and with many children’s stories and cartoons based on Aesop’s fables. With this quilt I wanted to express the story and the dual nature. I love the old black and white movie of the Catwoman and wanted to show a split picture. My daughter helped develop the picture for me. I found an old copy of Aesop’s fables and from that developed the man and his cat and Venus. I love putting together quilts like this and was excited to be chosen for the challenge!”

Cynde does a great job of portraying the events of the tale visually, given the quilt is less than 20″ square. I love her black and white portrait of Cat and Woman and the fabric she chose for her background makes a good backdrop. 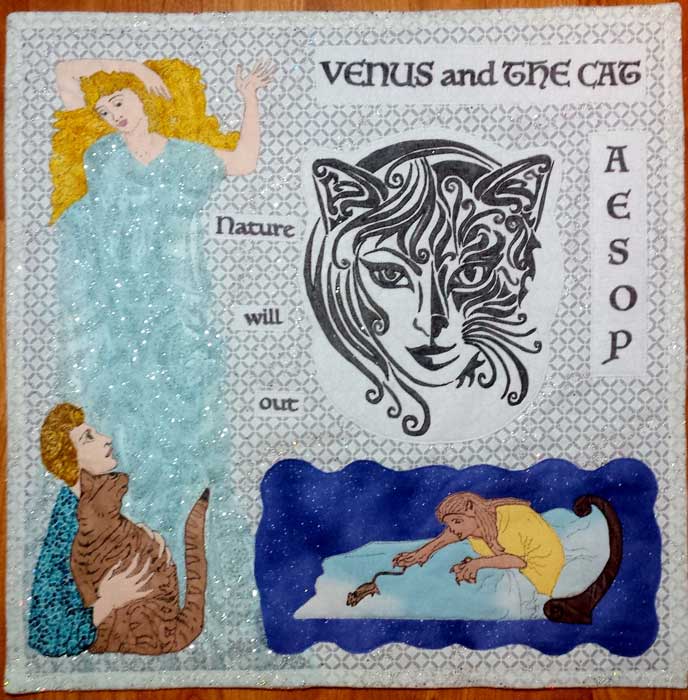 “Venus and the Cat” by Cynde Pakros