Carol’s title “Peeping Goldilocks” should be the tip-off to the fairy tale she accepted as her challenge piece, “Goldilocks and the Three Bears.” However, Carol’s research shows there is a lot more to the story than most of us know and frankly, it’s fascinating.

She writes, “My research about this well-known story revealed that the original Goldilocks was an old woman, often referred to as a fox and a bit more sinister than often portrayed. Some story versions wrote about three bachelor bears rather than a bear family. I decided to have a little fun and skew the story a bit. I depicted Goldilocks face as an anime cartoon, and showed her peeking in the window while the bears were sleeping. It also seemed like fun to have the bear “suits” hanging on the wall. After struggling with the coloring for Goldilocks face, I ended up using a combination of colored pencils and marking pens. I did the same for the bear suits and faces, which made their fur look more real. The finished quilt ended up looking more like a Disney cartoon than I intended!”

I appreciate Carol’s thought process and the expression on Goldilock’s face. She looks like she’s up to something and we have only to guess what. And don’t you love the idea of the “bachelor bears?” 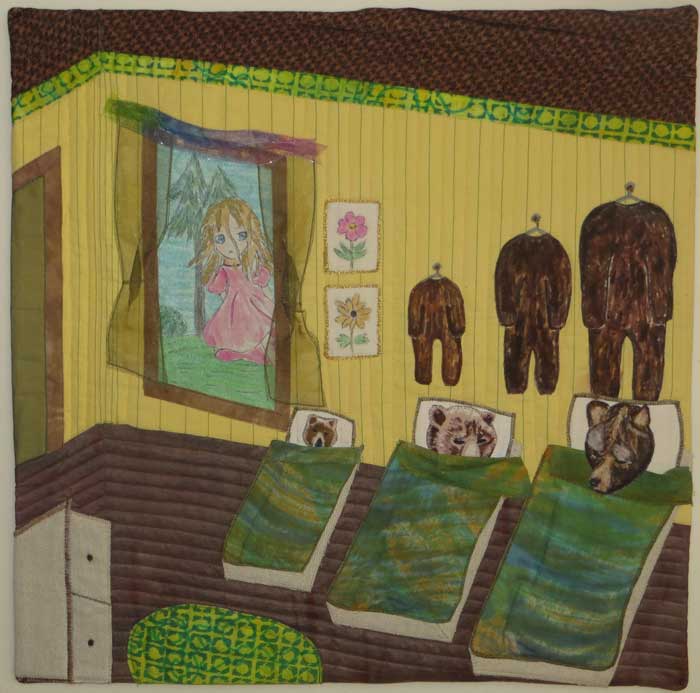