Patty Hawkins was the featured speaker at the Columbia FiberArts Guild‘s quarterly meeting on June 8th. I was not familiar with her name, but the moment she began showing images of her work, I “knew” who she was. I have seen photos of her quilts, many juried into Quilt National and Visions in San Diego, in magazines and books. Her Estes Park, Colorado home has inspired a great deal of her work. Aspen trees created with the shibori pole wrap dying technique appear in many of her quilts.

She teaches at the more renowned workshops, which showed in her presentation. Oftentimes, artists at guild meetings present a lecture typically called “My Journey as an Artist” showing pictures of all of their work from beginning to the present. While the presentations may be entertaining, I much prefer those where I “take away something,” whether an idea or technique or knowledge of art and design. Patty definitely gave the audience something to think about as she explained and illustrated visually her concept of simplifying a photograph down to its basic elements then exaggerating them. Next she creates a torn paper collage based around these elements before moving on to the fiber piece. She calls her technique “Matisse It!” You may know that Matisse in his later years, when he became unable to paint and sculpt, began making  paper collages called découpage. He cut motifs from paper, pre-painted with gouache by assistants, and arranged the motifs into compositions. Initially, the pieces were not large, but eventually he began designing murals and wall-sized works.

If you are lucky enough as I have been, visit the Chapelle du Rosaire du Vence also known as the Matisse Chapel or the Vence Chapel in Provence, France. Matisse built and decorated it between 1949 and 1951 and considered it his masterpiece. The chapel contains some of his work, but what truly struck me were the colorful stained glass windows, so unlike what I’m used to seeing in churches.

Here are two images of Patty’s work taken from her website showing her love of aspens. While she had two quilts at our meeting, the room is dark and poorly lit so I didn’t take photos. 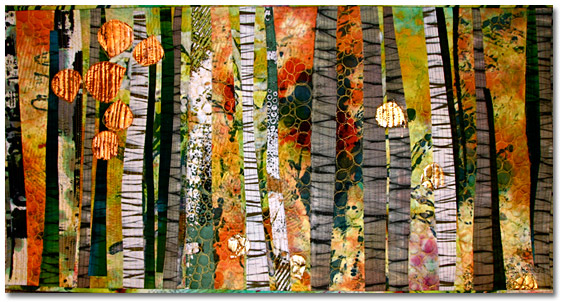 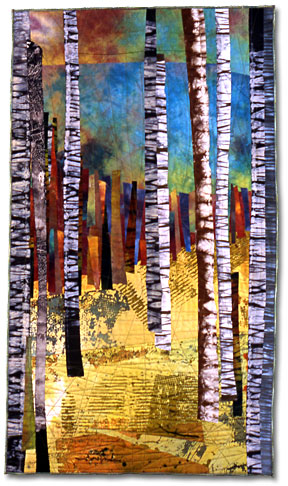