On my third day, I taught Accent Your Quilts With Creative Cords. We spent the morning doing hand made cords. The first one I introduced was the North-South-East-West cord aka a Round Cord, best done with two people. I supplied a kit with a variety of threads and base cords. To make this one, we used rattail–a strange name which has always made me wonder where it came from. It’s a larger cord, which makes it easier to learn the technique. Each student had a different color rattail. They got together, exchanging lengths to create a variety of colorful cords. That was part of my plan–to get people moving around, partnering, and exchanging ideas. 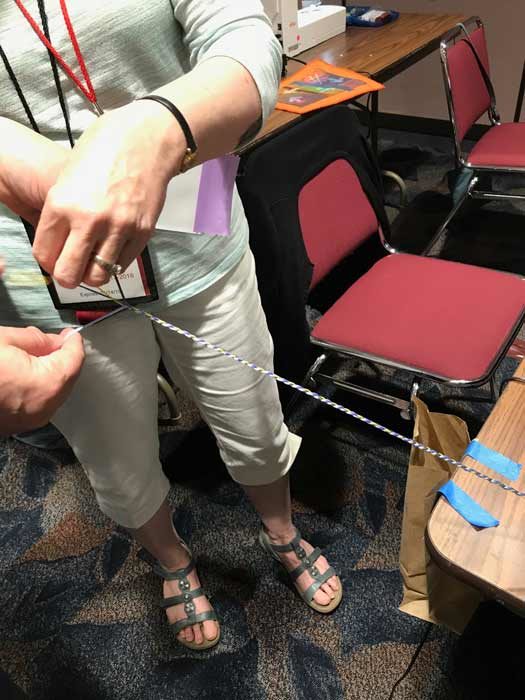 Making Round Cords aka North-South-East-West

Here’s a student knotting the end of the cord to hold the twist. Later on I showed how to end a cord with an attractive finish which can be done two ways–with a buttonhole or a hand wrapping. 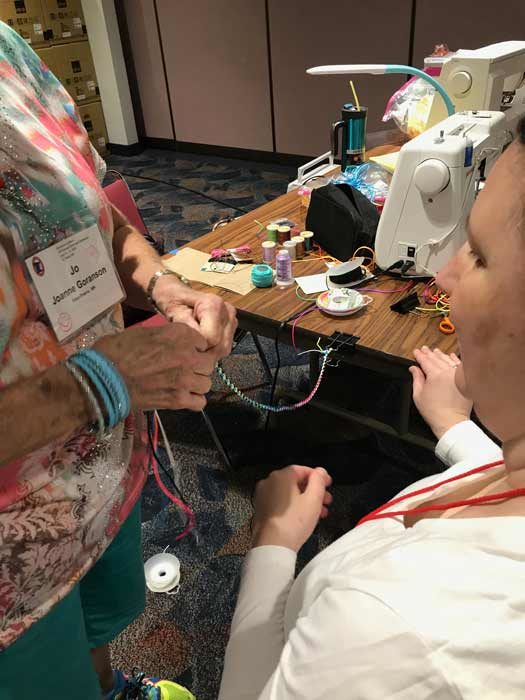 Our second cords were hand-twisted cords, which happen to be my favorite to make and to embellish with. I’ve used them on a number of quilts and a small bag. I also brought my friend Jeri Oswalt’s cord samples and her high fashion shoes which she trimmed with a hand-twisted cord.

I bought some “fluffy” yarn at the Dollar Store, having no idea how it would turn out when mixed with other threads and cords. The fluffy yarn was a hit! Wish I could say I knew it would turn out so well, but as I was trying to emphasize, the class was experimental. Try a selection of colors, threads, and fibers. If you don’t like the result, untwist/take apart and try again. 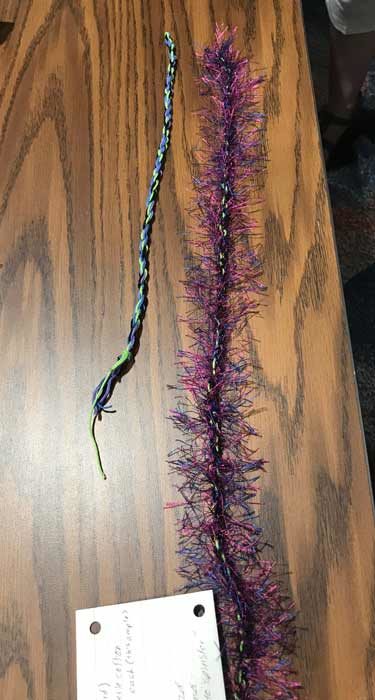 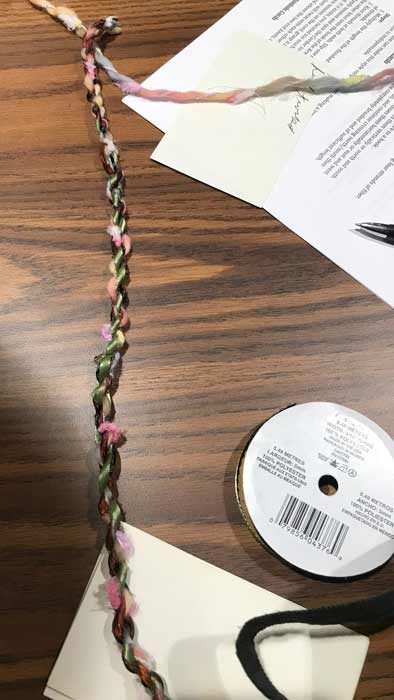 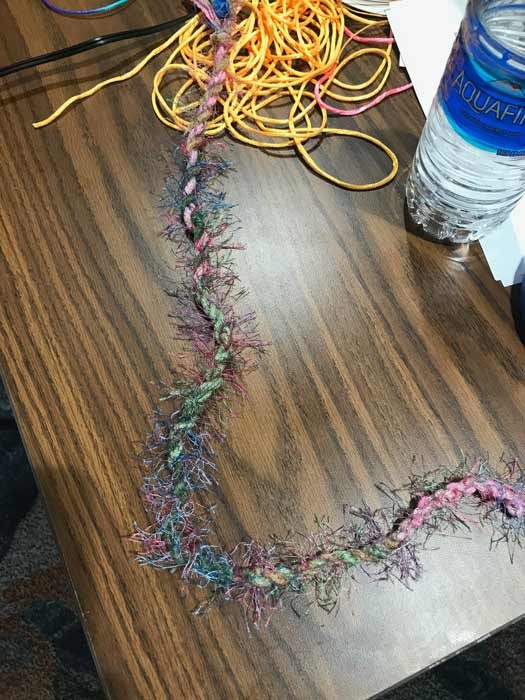 The show had a fabric challenge with a bit of a twist. There were two colorways–brights and pastels. Kathi Eubank and I  selected the winners. First place created by Barbara Tomczak is based on a book of the same name called The One Hundred Dresses written by Eleanor Estes, published in 1945. The subject deals with bullying and forgiveness. The book won the Newberry award and has never been out of print. Kathi and I were amazed and enchanted by the quilt’s imaginative dresses. Notice how the quilt is actually the two open pages of a book. Hanging in the center is a “bookmark.” 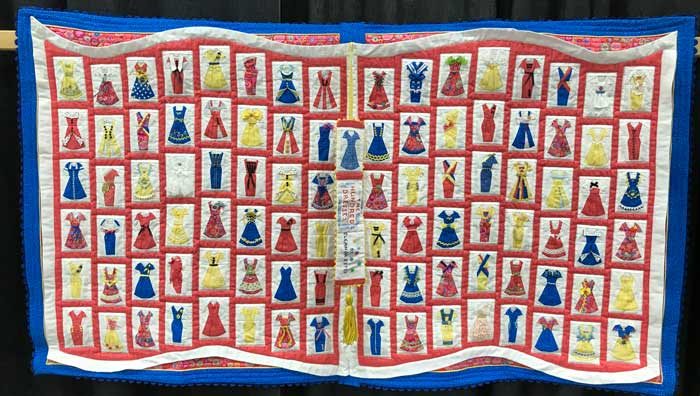 “The One Hundred Dresses” by Barbara Tomczak

I could not decide which among the dresses was my favorite. Look at all of the great embellishments! 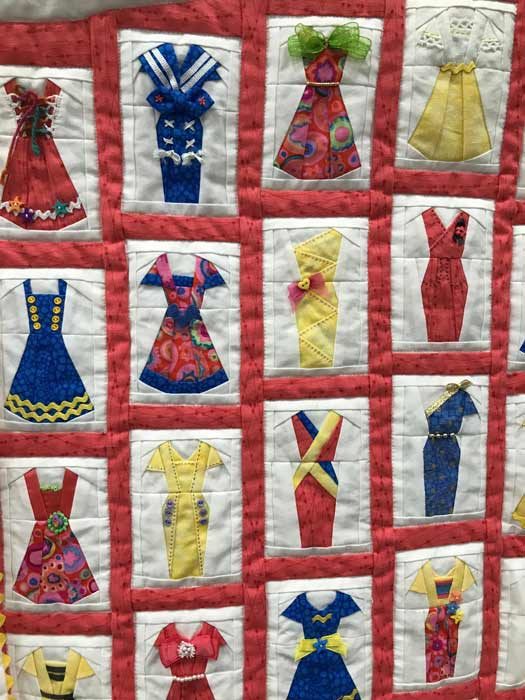 “The One Hundred Dresses” detail 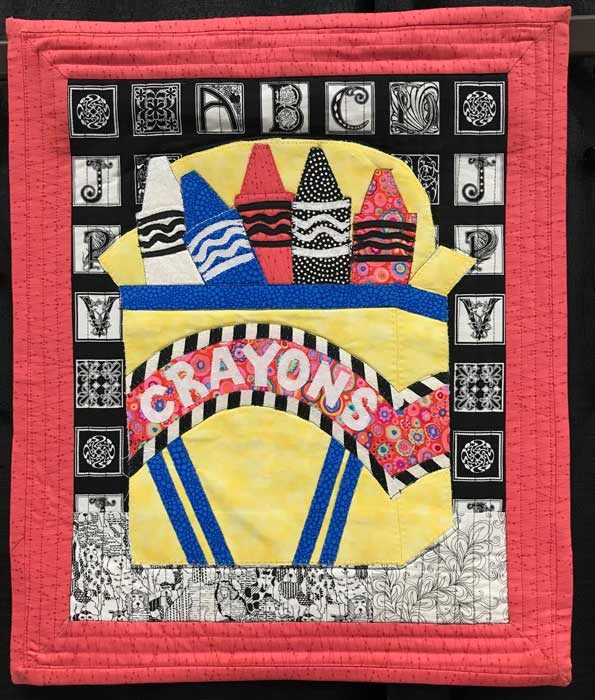 “My Favorite Color” by Karen Wallach

Here is a quilt I liked featuring the pastels fabric choice. 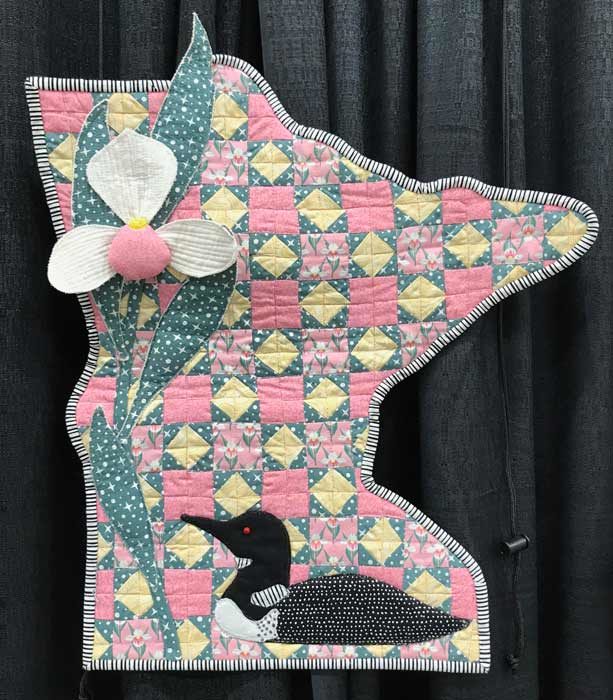 The evening before I left I saw this lovely view of the sun going down on the Mississippi River and had to take a photo. 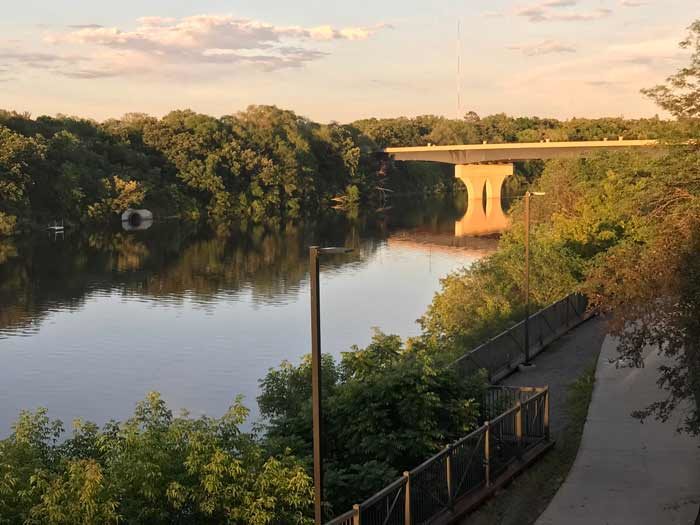 View of the Mississippi River