As mentioned in a previous post, I’m participating in a new International Challenge. This time the subject is World Heritage Sites. Mine is Notre Dame Cathedral in Chartres. By the way, this Notre Dame is not to be confused with the more famous Notre Dame de Paris. I’ve been to Chartres twice, once during a trip to France when I went with my French instructor and a small group of 8, then again when we moved to Paris in 1995 for my late husband’s employment.I selected Chartres cathedral from the list, because I felt a connection to it.

For this project I’m going to document my design and construction process on-line. Prior to my London City and Guilds coursework I had designed a few original pieces, but I never felt like I knew what I was doing. I was sure there was a specific way “real designers” did it. I suspect other quilters and fiber artists feel this way. I hope by showing a design process step-by-step, you can see it is not daunting at all, and as I discovered, isn’t much different than what I had done on my own. It’s simply a bit more structured and as I’ve found, leads to ideas I may not have considered and more likely better design.

The first step is research. The best research is primary, which is first-hand, in-person experience. Ideally, I would visit the cathedral, make drawings, record colors and feelings about the setting and how the surroundings affected me, etc. Since I can’t do that, I look for other avenues. When I did City and Guilds between 1995 and 1998, little was available on-line. I went to libraries to look at photos and learn about my subject. But with so much information now at our fingertips, you can find almost anything you need through search engines.

To me, there were two obvious images to use in the design: the building itself and stained glass windows. But it seemed to me, they might be too obvious. Nevertheless, I started my research collecting images of both. While I looked through many photos, these are representative of the first I collected. 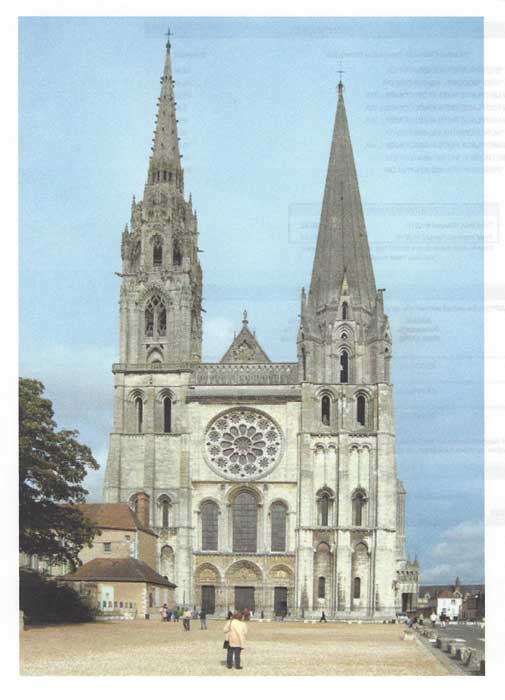 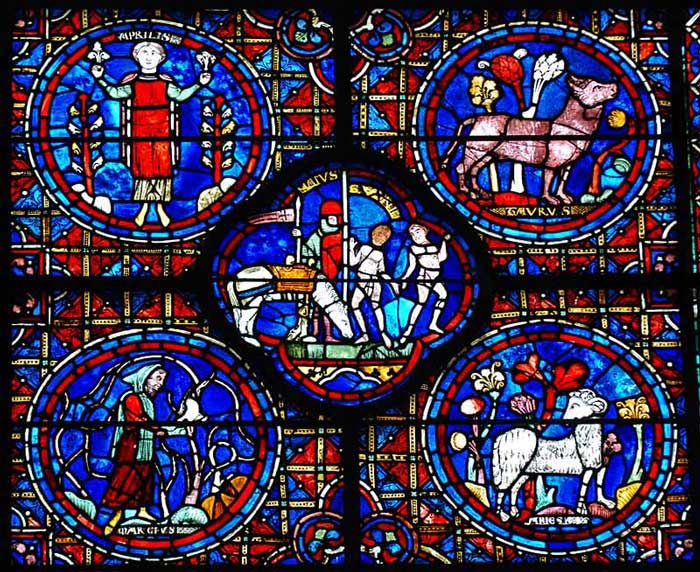 I knew the blue color, known as Chartres bleu, in the stained glass windows was famous in its time, because other stained glass makers were unable to duplicate it for a long time to come. After some initial thought, I decided to honor the history behind it and base my design on the Aries window in the lower, right-hand corner. I chose it keeping in mind the size of the quilt, which is 50 cm or 19.7″, and because I saw I could add some interesting quilting in the ram.

A day or two passed, and I wasn’t sure I was completely satisfied with my choice. So–more images, more thought. What if I based a design on the shapes of the windows and the glass patterns within them. I looked at both interior and exterior images. 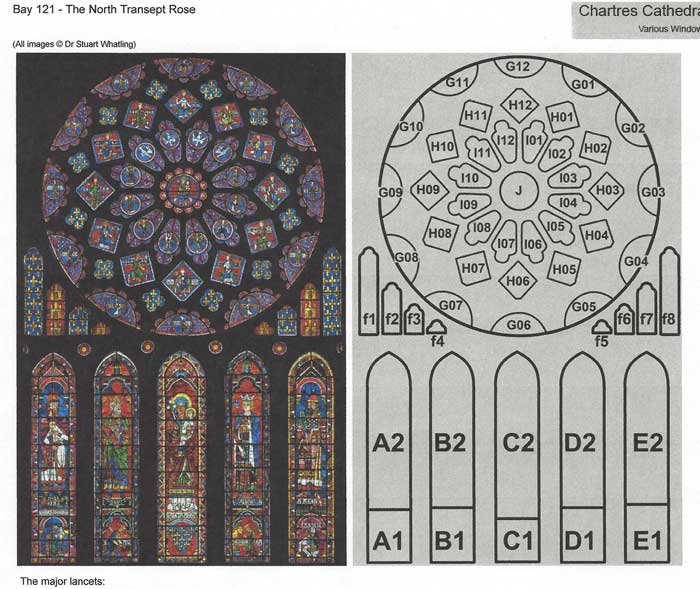 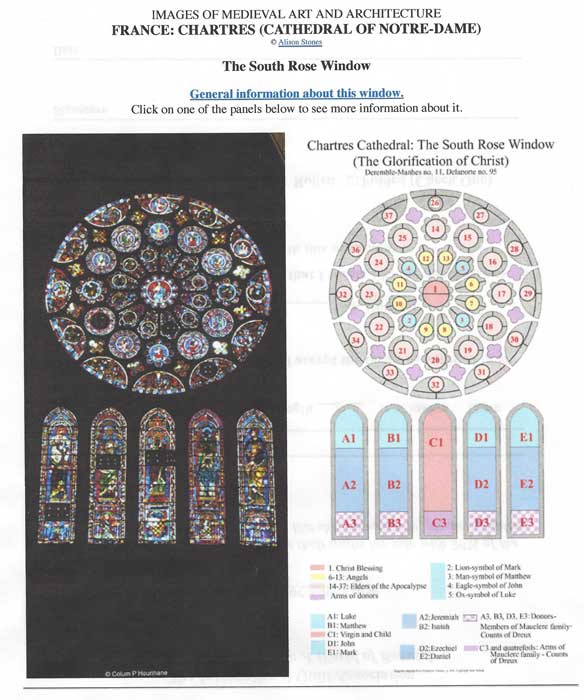 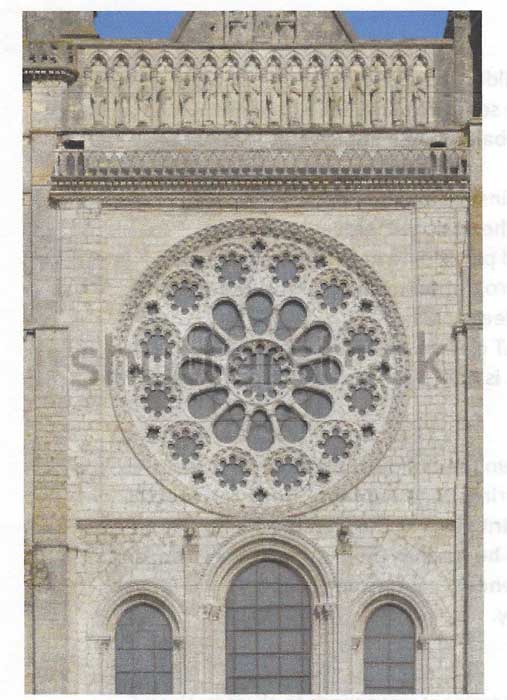 Another thought–forget the building and the stained glass windows and the history behind Chartres bleu. The cathedral was a great pilgrimage site. The labyrinth is famous. Could I design around it? The labyrinth held interesting patterns. The color was unexciting, but I didn’t have to hold true to it. 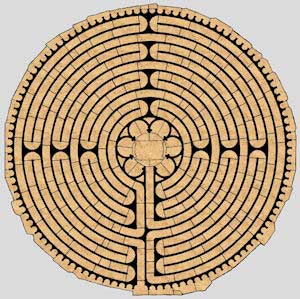 I was not sold on this idea so more consideration of the glass windows and color blue. I liked the shape of the four stepped windows below and wondered if I could use them somehow as side borders. 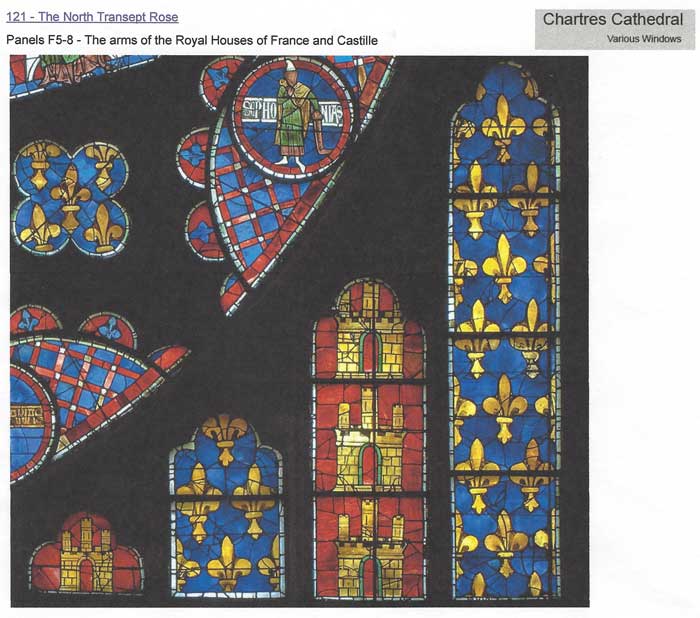 I liked the simplicity of the shield below, the repeating pattern, the color scheme, and the borders. Again, I considered the quilt size and that of the motifs with which I would be working. I decided to do a variation on this portion of the window. 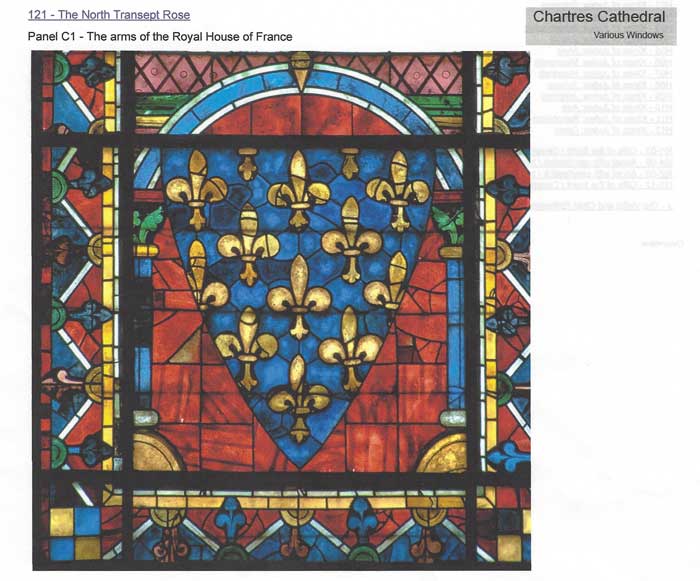 But a funny thing happens if you give your brain a bit of time, whether hours or days, to process an idea. I noticed how often the fleur-de-lys, a well-known French symbol, appeared in a variety of patterns. I also observed the repetition of half and quarter circles. I began playing around with settings featuring semi-circles and the fleur-de-lys. Then I thought back to the cathedral itself and wondered if I could do a simple drawing that I could stitch as a focal point. As I said earlier, it’s amazing how much you can find on the internet. I found a site called How to Draw Cathedrals in Five Steps, and wouldn’t you know there were instruction for Chartres. Step 1 is below. 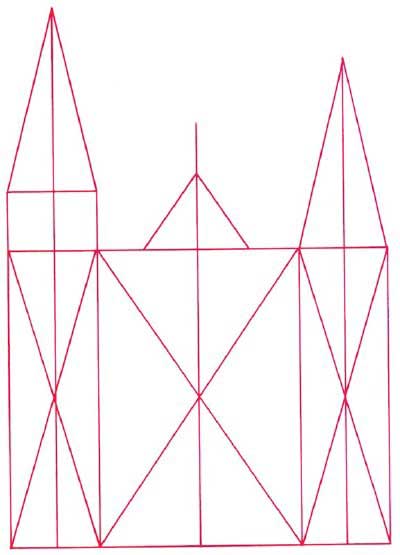 How to Draw Chartres Cathedral

Then I found a site on how to draw a fleur-de-lys. 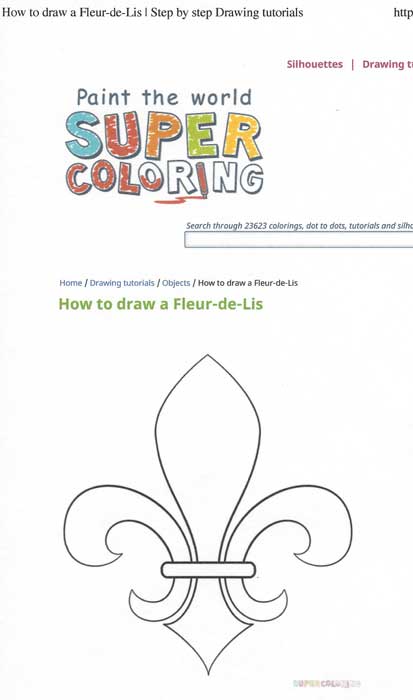 How to Draw a Fleur-de-lys

Using the “four-leaf clover’ shape from one of the windows, I turned it on-point and simplified it. Instead of small repeated motifs, my design has one large motif, which I also redesigned as a combination between the window’s original and that from the internet. 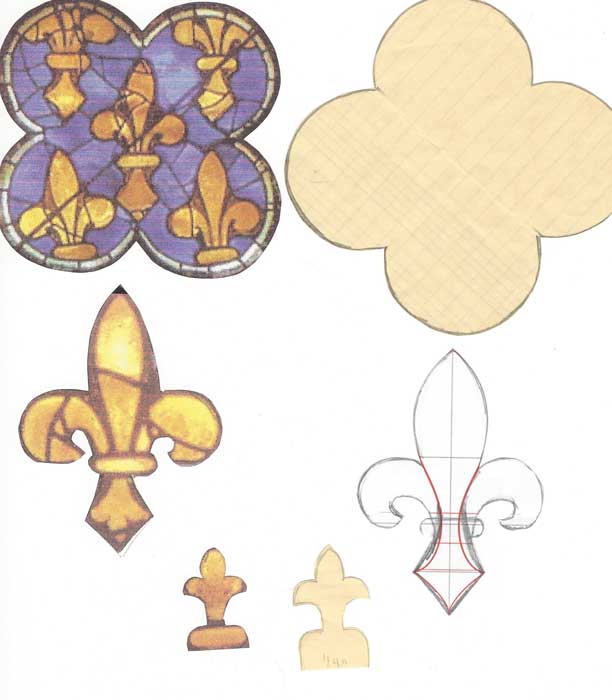 Here is my final drawing with detail shots. Note that it’s not a polished drawing, but it’s all I need to determine measurements, motif sizes and placements, etc. 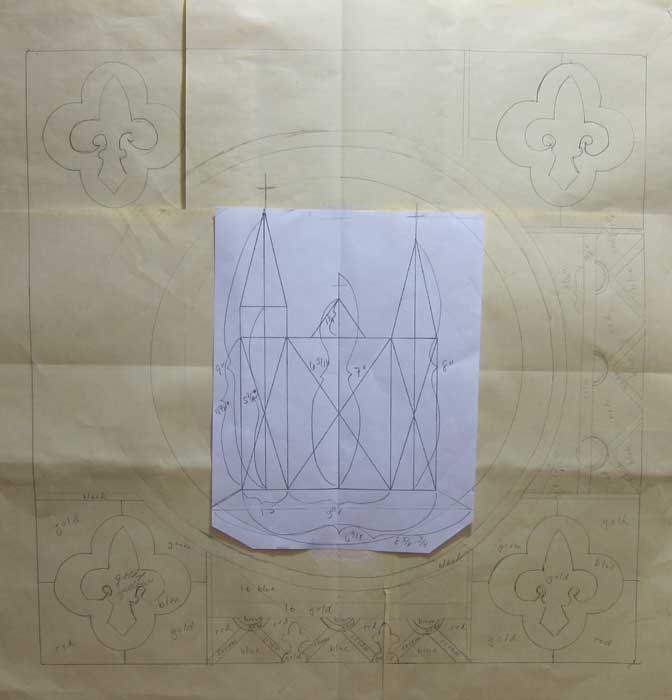 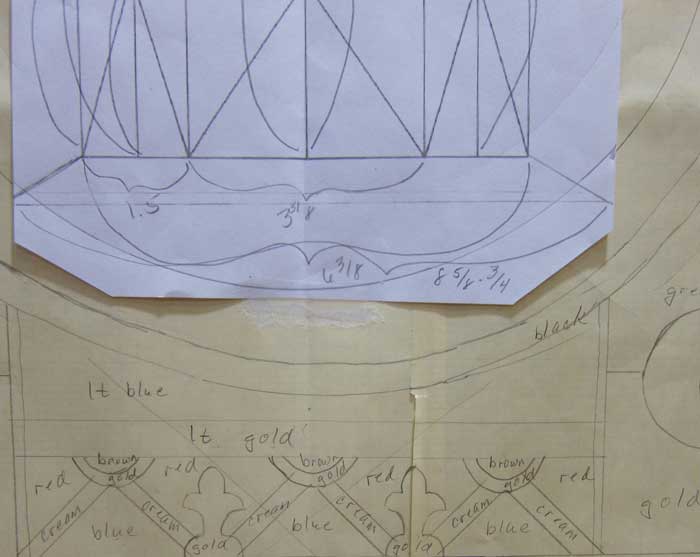 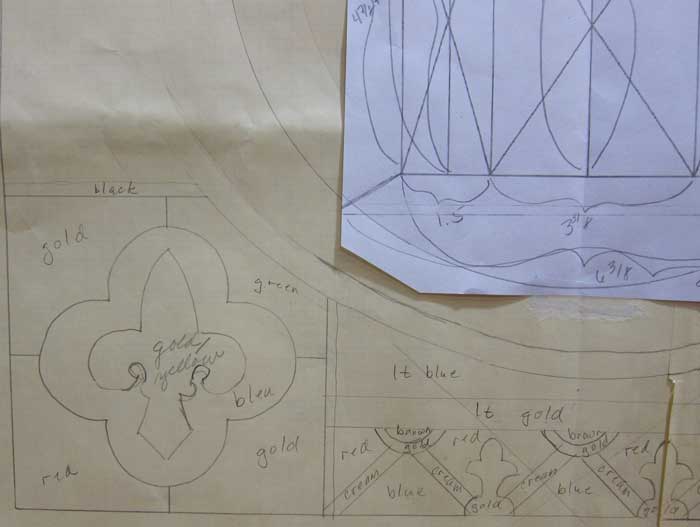 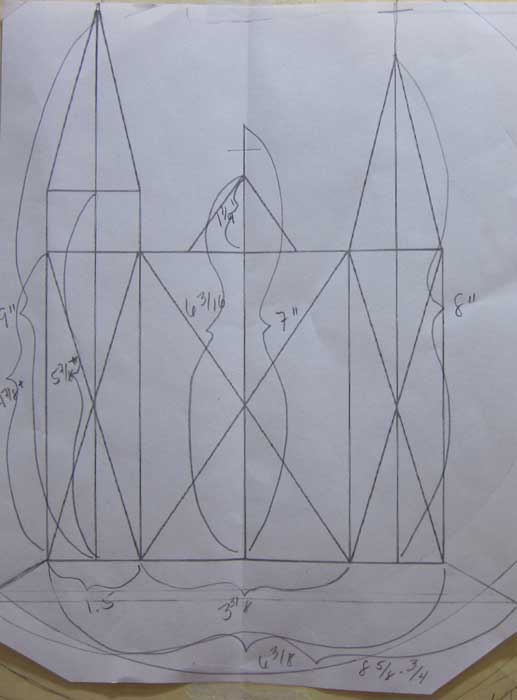 Finally, I chose colors and found fabrics in my stash, although I purchased the darker of the blue to represent Chartres bleu. 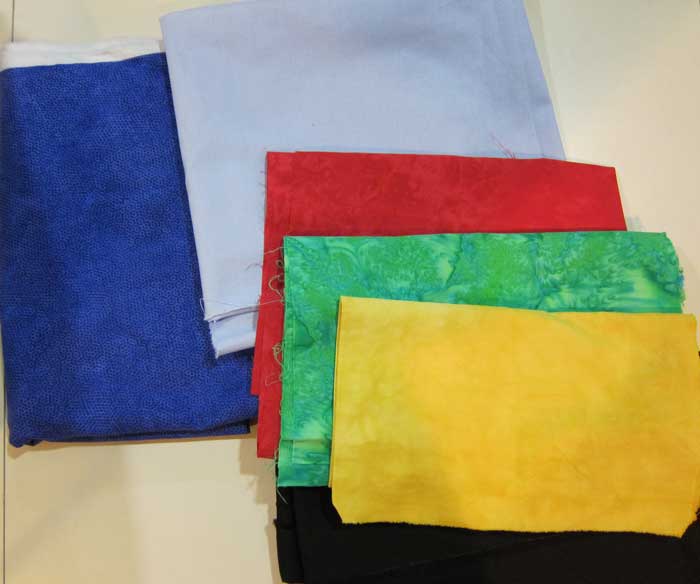 What’s next? Sampling. What is sampling? It’s auditioning not just your fabrics but all of the materials and techniques you are going to use to create your piece. The importance of sampling was a crucial step in the design and construction process that I learned in City and Guilds. Don’t be in a hurry to begin until you know exactly which materials and techniques will give you the appearance you are seeking. So what’s my initial plan? It’s to hand embroider the cathedral on the light blue fabric, then machine appliqué the four-leaf clover and fleur-de-lys motifs by machine. But what threads and what color threads shall I use? Will I appliqué with a zigzag stitch or the more formal satin stitch? I could couch a fiber around the appliqué. So many choices. All will be determined through sampling small areas and deciding on the the look I want.