As promised, here is how my World Heritage Site quilt featuring Chartres Cathedral is progressing. The first step was sampling threads and stitches in order to embroider the cathedral. From my stash, I chose a six-strand floss in the same shade of blue to match my blue fabric. I have done a lot of embroidery over the years and generally prefer the effect of two strands. One is good for fine detail work but a little wimpy for an outline and three is too heavy. I sampled three stitches: split stitch, back stitch, and stem stitch. Split stitch, when done with Persian wool, is beautiful. I thought perhaps it would work by “splitting” between the two strands of floss, but the effect was that of a chain stitch and that’s not what I wanted. I then tried a back stitch. Normally, embroidery is done on an even-weave fabric, and the stitches of a back stitch line up perfectly. I’m working with Kona cotton. Because it’s a quilting fabric and not even weave, the stitches wander visually. Not attractive for a building, whose lines should be straight. The back stitch is on the right-hand side of the tower roof below. I decided upon the stem stitch, which may not seem intuitive. I think many stitchers and sewists think of it for plants and flowers, but I’ve used it numerous times to good effect on a variety of motifs. The stem stitch appears on the left-hand side of the roof tower and the tower side. After choosing the stem stitch, I decided to use a single strand around the arched windows as shown below.

I noticed in the five-step drawing lesson that shading was done with cross-hatching. I’ve done some in the drawing classes I’ve taken and thought I would experiment with penwork which would give some contrast to the stitching and enable me to execute finer detail. I had Pigma Micron pens in two blues and sampled both. As you can see, one matched the blue thread very well while the other was too green. I told my partner Mike that it’s obvious I own more tools and supplies than anyone needs when I had both the thread and pen color in the exact shade needed! After trying just a bit of penwork, I knew this was the way I wanted to go.

Here is my completed embroidery. I’m not bragging, but I have to say I love it, although I’ve been told the one cross is crooked, which I will have to correct. The finished image exceeded my expectations. I’m just happy when it meets them. 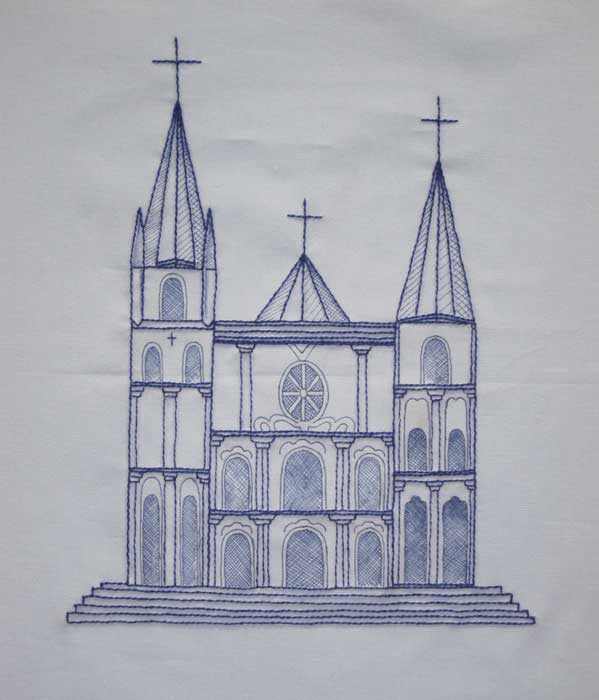