I recently returned from a five-day workshop with Hollis Chatelain entitled Understanding Threads. This was the seventh workshop in a ten-part series begun six years ago. We meet once a year in Silverton, Oregon at The Oregon Garden. For the first three years we drew with pencil, the third year concentrating on portraiture. Since then we have explored color, first through paper and colored pencil exercises, then fabric. Hollis has a number of these groups going around the US.  While some participants have dropped out over the years, the majority of my group’s members have continued on. I have found each workshop to be more than beneficial to the growth of my work, but this year’s proved to be the most eye-opening. I will never look at thread the same again, and neither will anyone else in my class.

Hollis pointed out at the beginning of the workshop how most quilters gravitate toward “safe” thread colors in their work, oftentimes with the result that the quilting blends in rather than contributes to the overall effect. Throughout our exercises, she encouraged us to use unexpected thread colors. The results were enlightening. My best recommendation: explore fluorescent threads even when you are sure they are too bright.

Last year, Hollis gave us an assignment to create a quilt on a subject we were passionate about. I narrowed my ideas down to two disparate subjects: cycling and my grandmother, Kathryn Kerler. Every year, I cycle in the Providence Bridge Pedal here in Portland, OR. The Bridge Pedal raises funds for heart research, an important topic in my family has both my father and late husband had heart-related health issues, with my husband dying of a heart attack at age 51. The event closes down or partially closes up to ten bridges in the city. Cyclists have the opportunity to ride over all of them, unhindered by auto traffic, enjoying the views of the sparkling Willamette River and the city beyond. The Bridge Pedal takes place in August, so the weather is always wonderful. I took many photos last year in preparation for my quilt.

But then I decided upon my Grandma Kay, as we called her, who led a most amazing life. She was born in Nebraska in 1908 into a Mennonite family and was number twelve of thirteen children. She married my grandfather, had two children, and farmed with her husband, Julius, until her early thirties. Then something happened within the community and my grandparents moved to Portland, OR. My grandmother didn’t like it, having never left her home state, so the family moved back to Wisner, NE. However, after a particularly cold and snowy winter, she decided she wanted to go back to Oregon. My grandfather had contracted to raise and bring in crops for a farmer, so he and my father Benne, who was sixteen stayed behind. My grandmother and aunt, twelve-year-old Mary Lee, went back to Portland.

As a Mennonite my grandmother had only gone to school through the eighth grade, because, as she once explained to me, by then you’ve learned all you need to run a farm. I’ve since learned she wanted to go on, but her parents wouldn’t let her. Instead, she had to help care for a relative’s children. Once back in Portland, my grandmother was free. She cut her hair and wore make-up, two things she had never done. Then she found a job as a bar hostess, eventually becoming a barmaid. Every year she went to Hawaii and Reno with a friend. Her personality had just been waiting to get out. When I thought about what symbol I could best use to depict her, I thought back to how she would always greet you with a big kiss on the cheek, leaving a bright, red lipstick print, which she always tried to rub off but couldn’t. In her honor, my quilt contains a multitude of red lips.

I would show the entire piece, but I’m planning to enter some exhibits, and if accepted, there are those that require the piece not be shown or published anywhere previously. 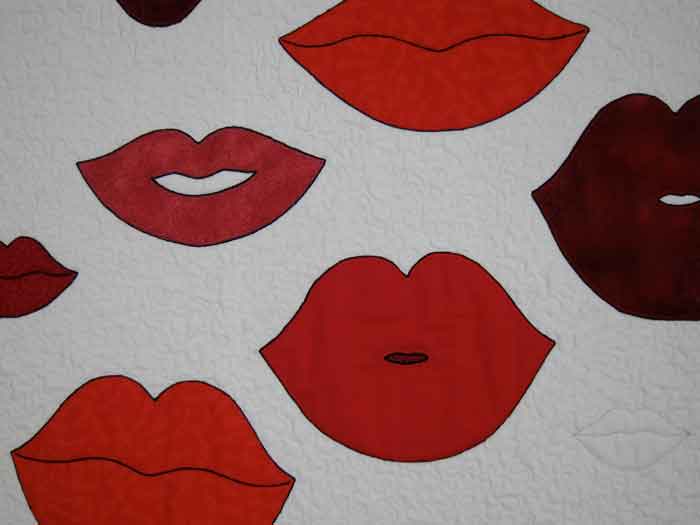