I’ve returned from three weeks in Provence where we stayed in the renowned wine-producing village of Chateauneuf-du-pape, which means the pope’s new chateau. The chateau was built in the 12th century. However, little is still standing as the Germans set fire to it during World War II, as they were retreating. Nevertheless, the chateau is a beautiful place to spend the evening when it cools off and the sun sets behind the Rhône River. Quite a few people picnic around the chateau. 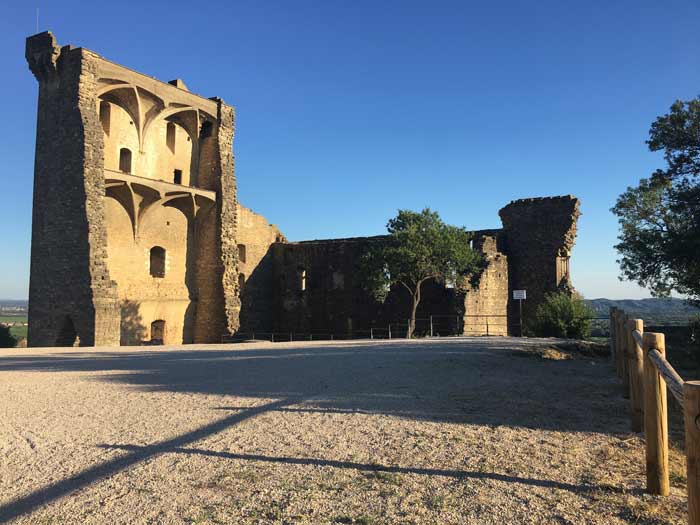 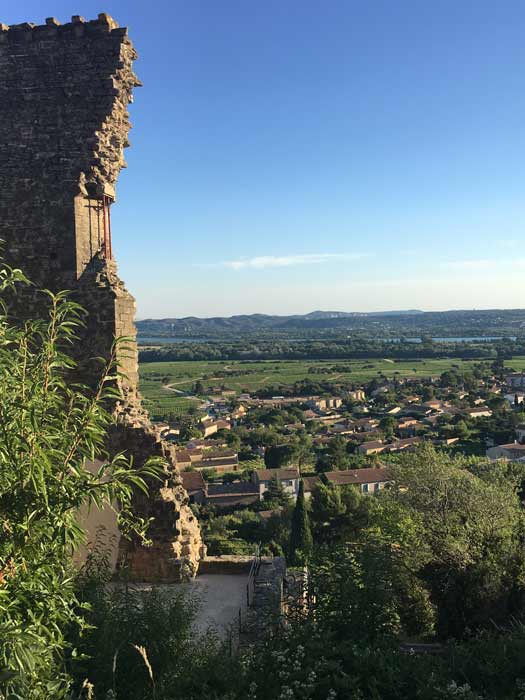 View of the village from the chateau

Our first visit in the region was to the Pont du Gard, a bridge over the Gard River. The bridge was actually a viaduct built by the Romans to carry water to the city of Nîmes. I’ve been there before in the early 90s, but Mike, my partner had not. We hiked around the area and waded into the river to cool off. The temperature during the time we were in France ranged from 90 to 100 degrees two of the three weeks. Yikes! Too much for a Pacific Northwesterner. The Pont du Gard has become much more touristy than when I was first there. Now there’s a parking lot. You have to pay to visit the bridge. There are not one but two boutiques and a café along with a museum. Still, I recommend seeing it. The structure is amazing and the history fascinating. The viaduct became inoperable, because as water flowed through over time, mineral deposits built up, filling in the fours sides of the stone structure. In the 1800s nobility drove across the bridge in their carriages. There have been two serious floods, the last in 2006. The structure was seriously compromised, leading to a support which tourists can walk across from one side to the other as you can see in the photo below. 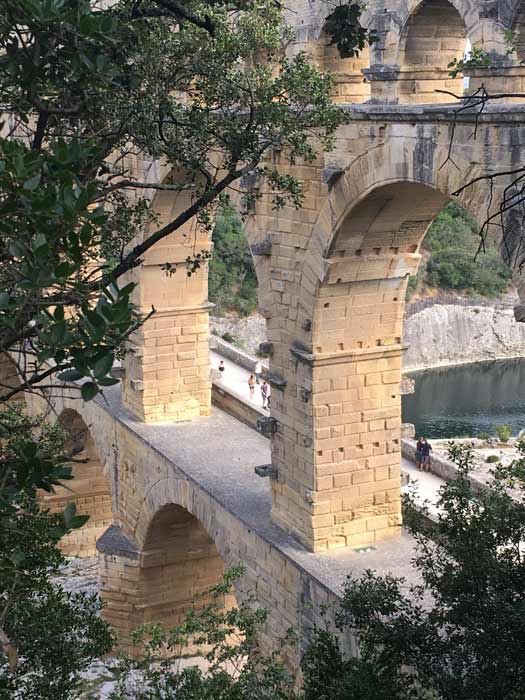 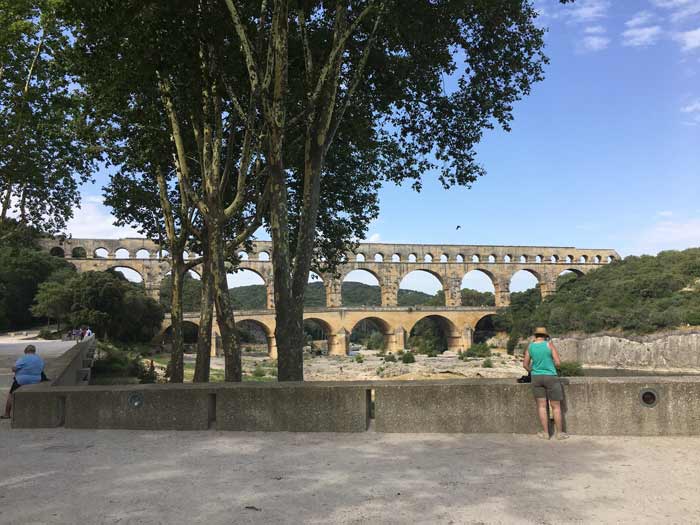 View of the Pont du Gard

Of course, we visited the city of Nîmes with its two ancient Roman structures, the Maison Carrée, the oldest known Roman building in France, and the Amphitheater, surrounded by fencing. Workers are cleaning the pollution and grime from its stone surfaces. 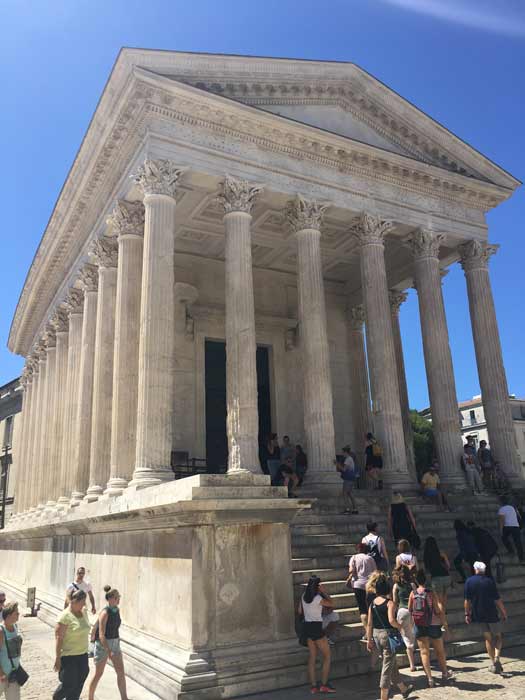 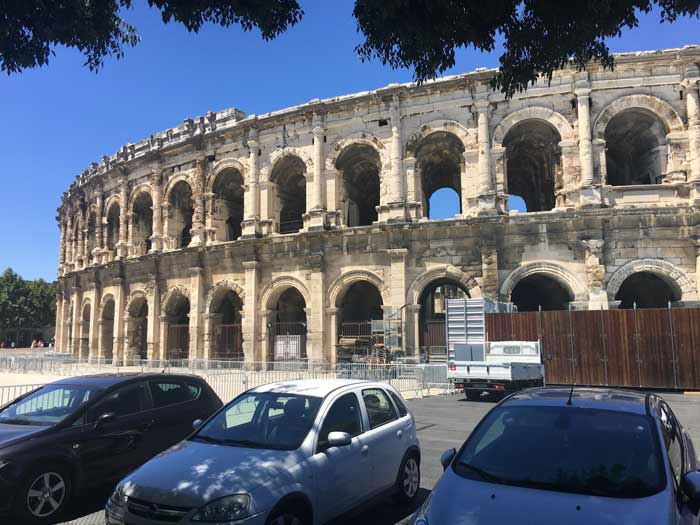 While strolling around the city, I spotted the Souleido shop, filled with beautiful clothing, scarves, and bags. I was surprised to see a “museum” inside the store, showing some of the fashions and fabrics from a variety of decades. 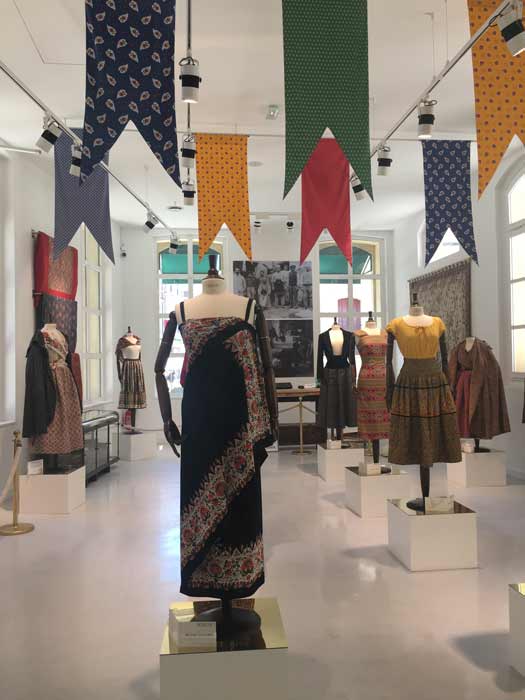 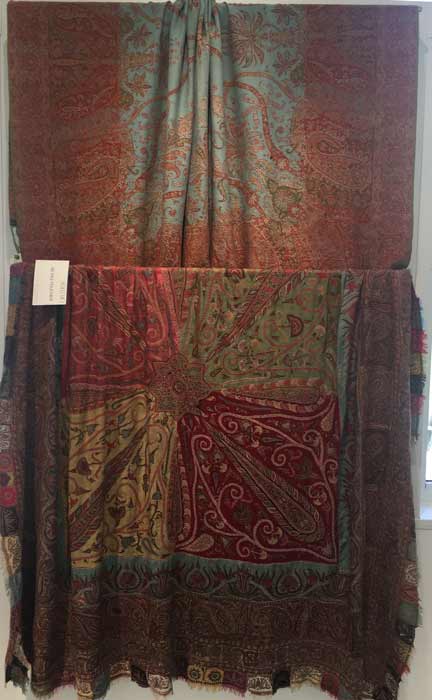 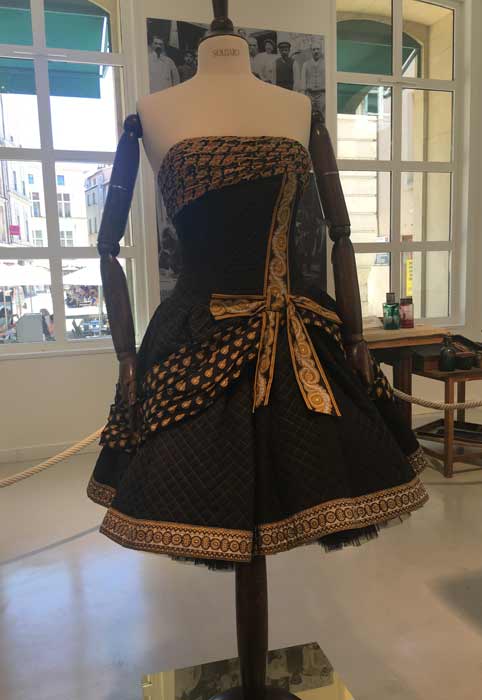 My favorite “little number”. What sass!

The Romans were all over southern France. You can find antiquities it seems wherever you go. Here’s the theater in Orange, which was one of my favorite discoveries. Look how the stage is set for an upcoming production. There is a door in the jester’s tassel resting on the floor, and the tongue is a slide. I would love to see how the actors use this prop. 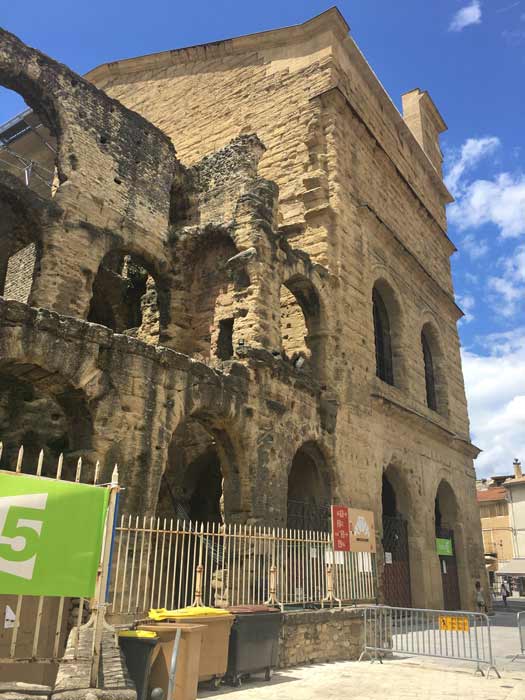 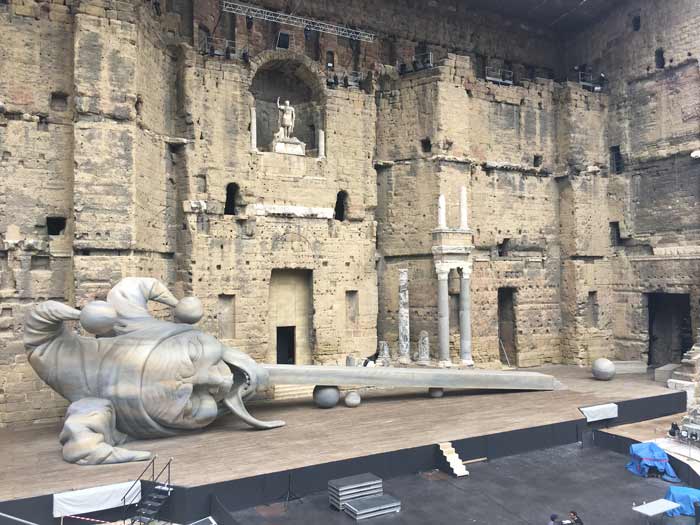 And of course, churches also abound throughout the region. We visited the Palais des Papes, which was new to me, having never been to Avignon before. 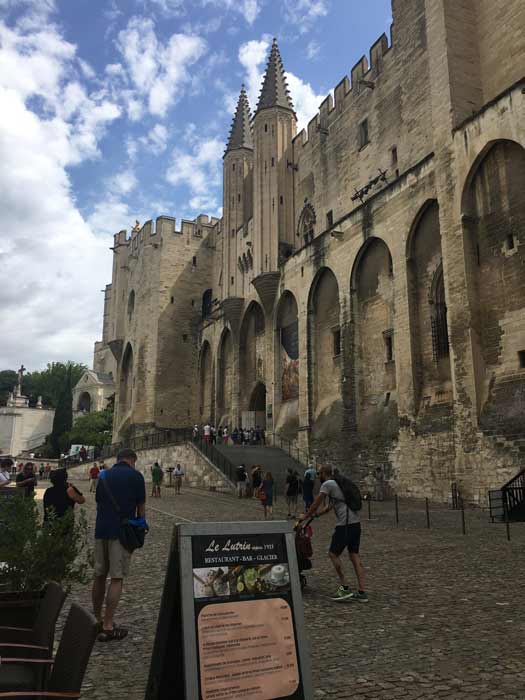 Another surprise among many during our trip was an exhibition of African artists. I gravitated to those working with fiber and mixed media. The work below is by Abdoulaye Konate who focuses on tapestry work and whose fabric compositions contain heritage-related features. He seeks to express his fears and hopes concerning the problems of today’s world. 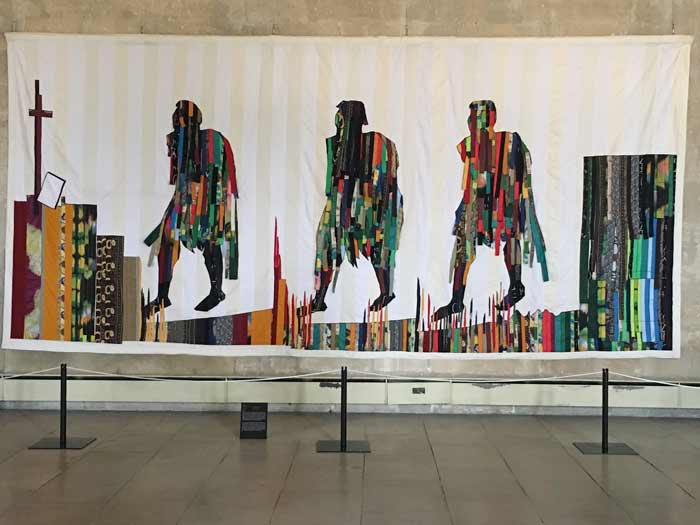 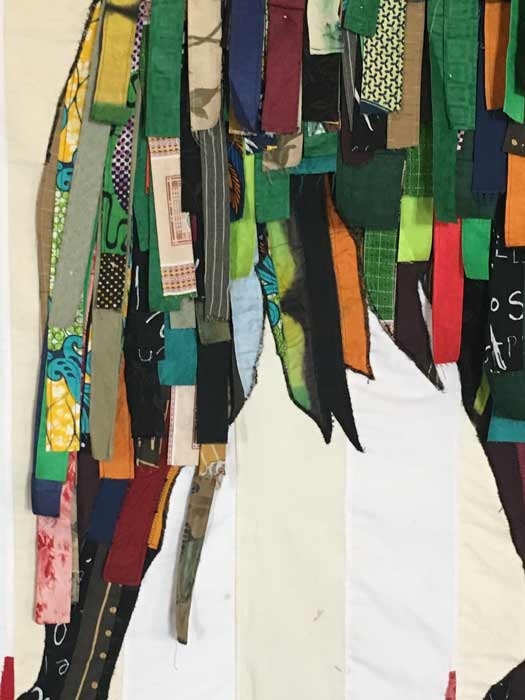 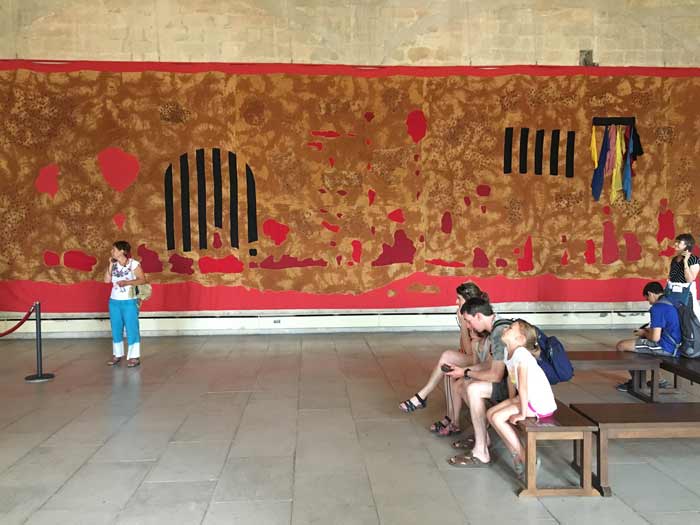 Nnenne Okore has studied under El Anatsui, one of my favorite contemporary mixed media artists. I’ve blogged about his work twice in the past. She draws upon her knowledge of weaving, sewing and dying and uses day-to-day materials in her work, such as newspaper, wood, fabric, rope, or clay. The piece below is composed of clay and jute. 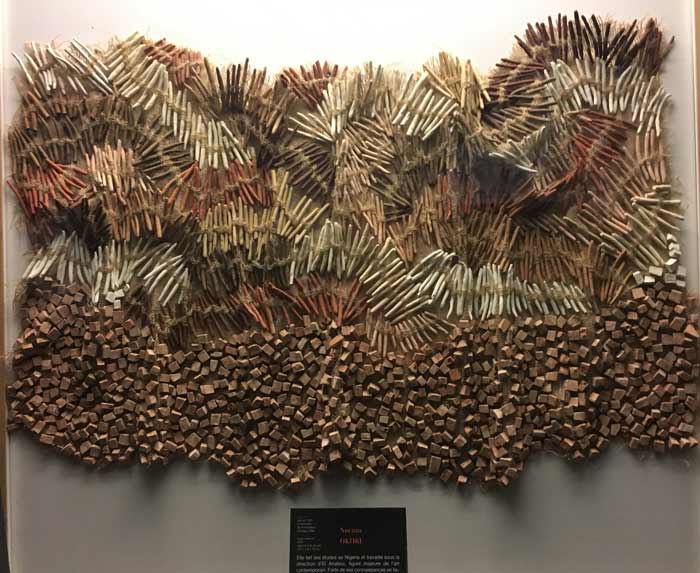 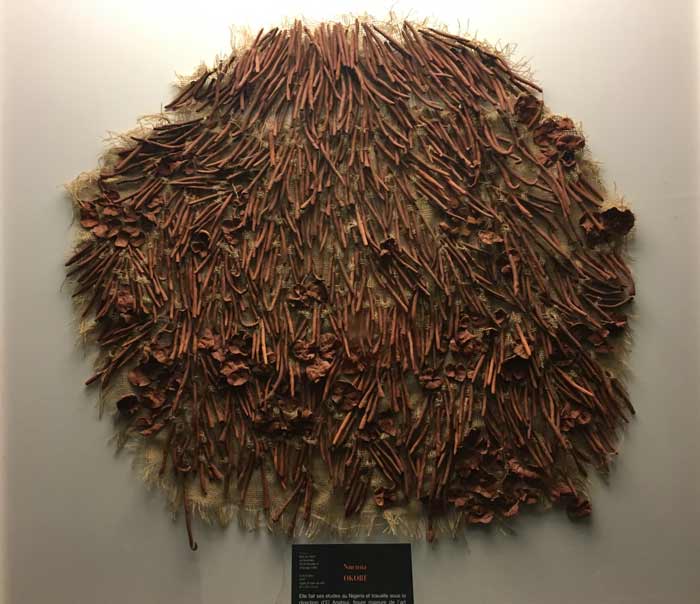 While we are on the subject of art, we traveled to St Rémy where Vincent Van Gogh spent some time. Unfortunately, the townspeople tried to force him to leave due to his strange behavior. Rather than leave, Van Gogh checked himself into the St. Paul Hospital for a year. 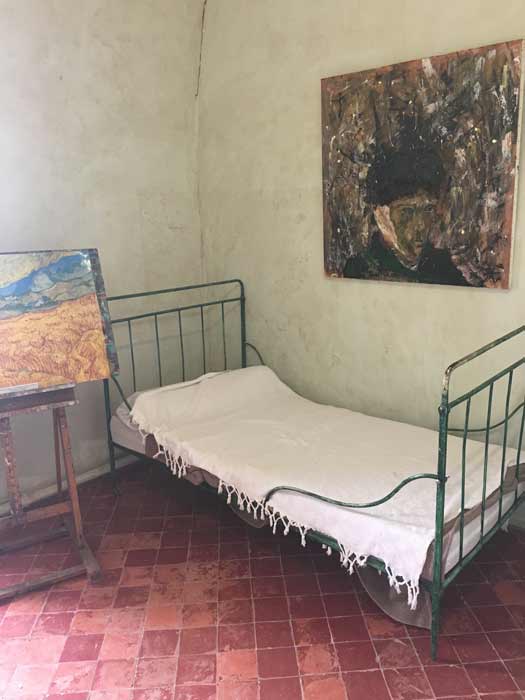 I was struck by a quilt hanging outside the bedroom. Artists were invited in 1995 to create blocks based on Van Gogh’s paintings. I particularly like the block which says, “qui a inventé la nuit,” meaning “who invented the night.” 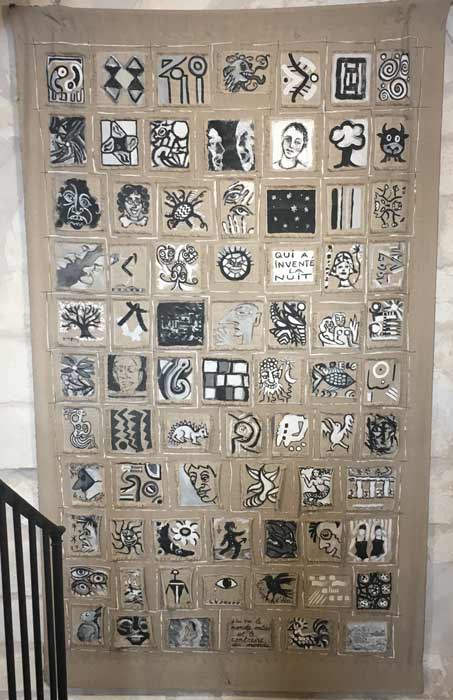 The building is a museum and has a lovely lavender field out back. 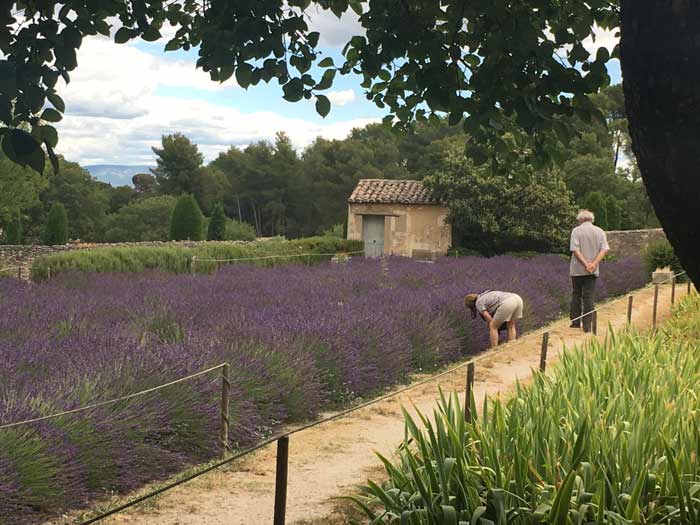 We are not done with France. More to come…