Yesterday I attended a docent tour in French of Rodin: The Human Experience exhibit at the Portland Art Museum. While I have been to the Rodin Museum in Paris and studied his work in a modern art course while living in France, here are a few things I learned yesterday that I had never heard before. Nuggets like these are what make a tour so worthwhile and interesting. I applaud our docent Karen.

Rodin was a great admirer of classical Roman sculpture in which heads or appendages are missing. He wanted viewers to feel the emotion and movement of his figures and purposely designed a number of sculptures without heads, arms, or hands.

At the same time, he felt the hands and feet to be very expressive. You will notice on many of his sculptures these body parts are oversized to the rest of the body. It may be difficult to see in the photo, but the first thing I noticed was how large the hands appear in relation to the rest of this sculpture. The feet are also “too large” for the body. The photo on the wall is of Rodin himself. 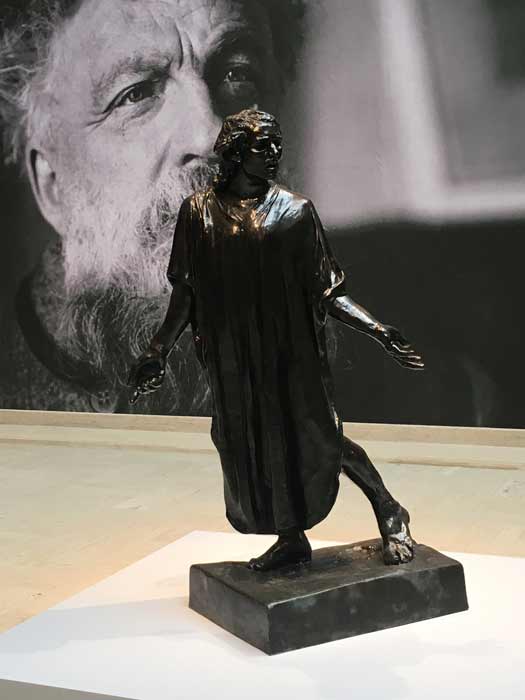 A contemporary of Rodin’s was Aristide Maillol, a sculpture, painter, and tapestry designer. He declared the sculpture below as the best among Rodin’s works. The piece was scandalous as the legs are apart. You will immediately notice the head and one arm is missing. But look at the movement. Imagine how difficult it was to model for this piece. Rodin always worked with live models, except when commissioned to do a piece for someone no longer alive. An example is the writer Balzac with four sculptures on display in the exhibition. Rodin also used dancers as models, people who know how to use their bodies. 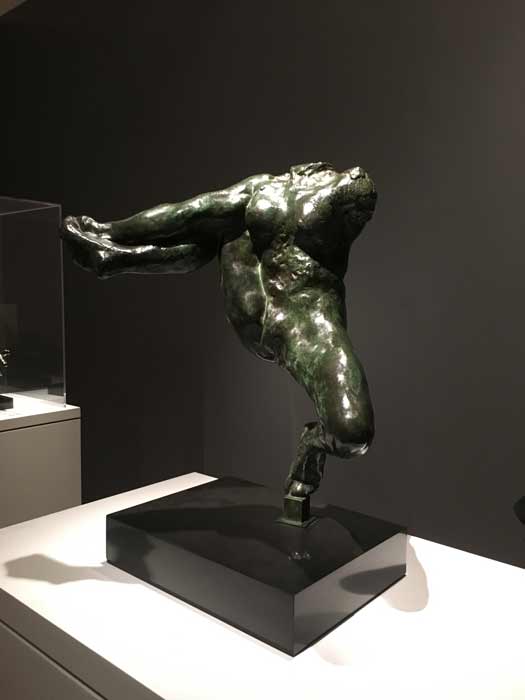 But the most fascinating and surprising thing I learned was that before his death in 1917, Rodin gave the State permission to reproduce his sculptures up to a certain maximum, meaning that anyone, even you or I, can order a Rodin sculpture for our very own home. There are no restrictions as to who can do this–except of course the cost. One member of our group said yes, but it would only be a copy, not one done by Rodin. What she did not realize was that Rodin had a team who worked for him creating the sculptures from his designs. There are, in fact, a number of the same sculptures out in the world.