Shopping again–but this time at the Gwangjang Market, known for its fabrics including ramie, mosi, sambe, and silks. 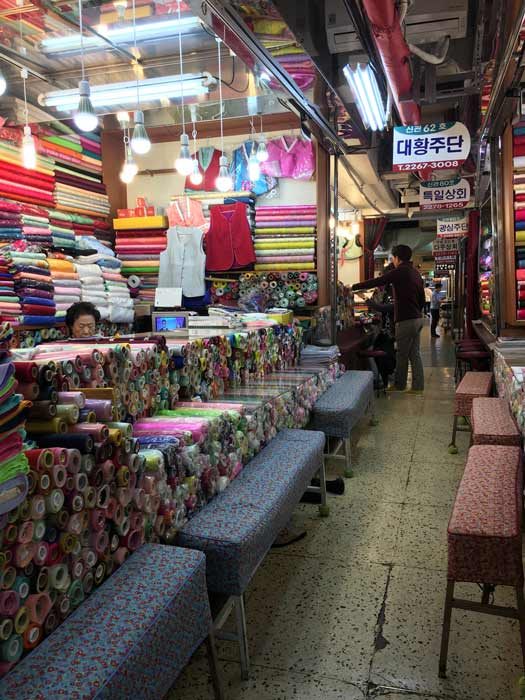 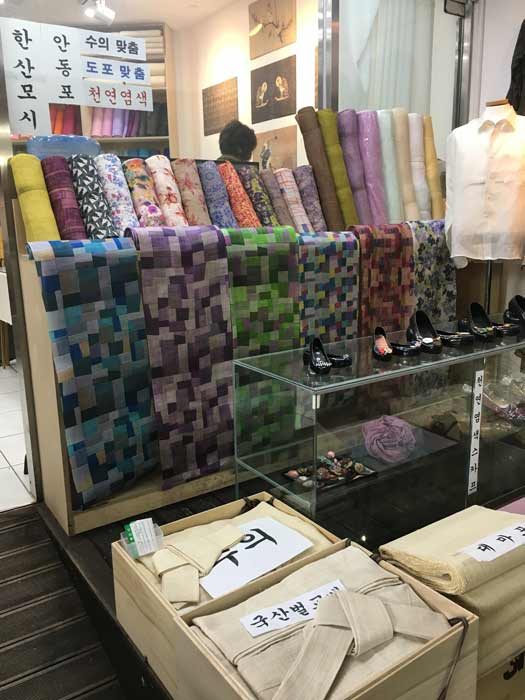 Youngmin Lee, one of our tour leaders, took us to her favorite shop for ramie, which she uses to create Bogaji. Here is Ping Ting, our group member from Singapore buying ramie. She had a sheet with her containing swatches of the colors she already owns and was looking for new colors to add to her collection.

You can see ramie comes in rolls rather than the familiar bolts we see in fabric stores. The folded fabrics in the shelves behind the vendor are hand-dyed cottons and cotton blends. 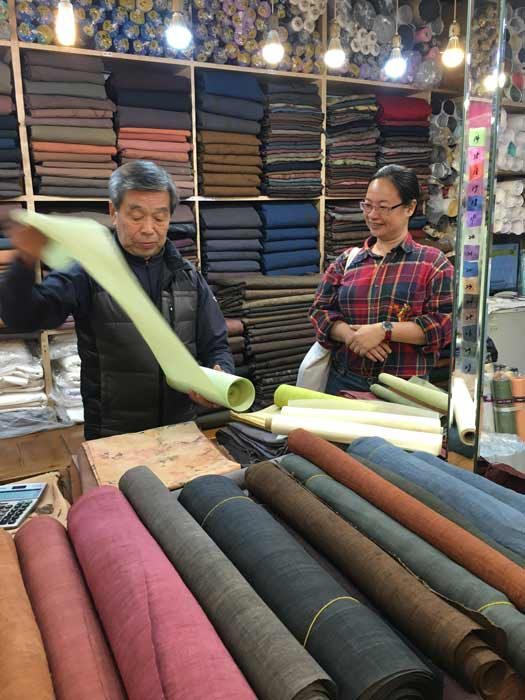 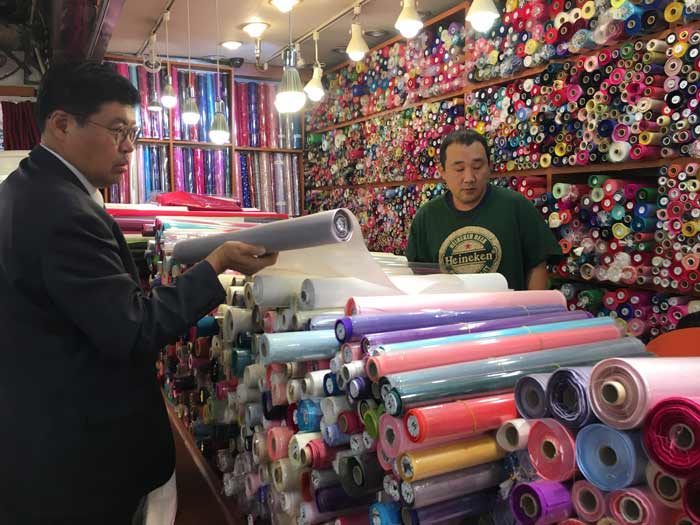 Mid-morning we stopped for a mini-gimbab snack. The gimbab are very much like sushi in my mind. They contain slender slices of vegetables inserted into rice and wrapped in seaweed. The dipping sauce in the bowl is rather spicy. 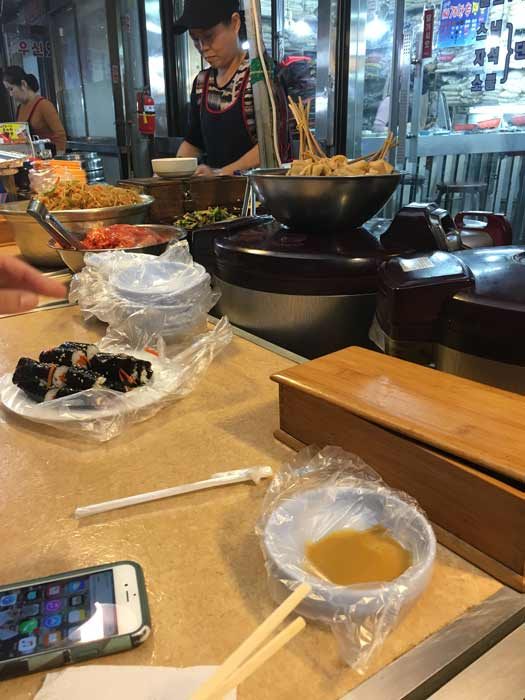 Here’s Youngmin picking up her chopsticks getting ready to eat some gimbab. 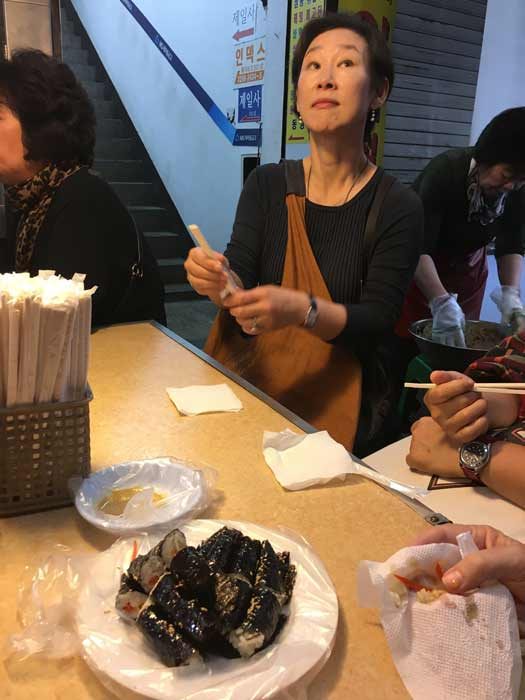 Much like malls in North America, Gwangjang market has a food court but with some differences other than the obvious–food. The atmosphere is bustling, open, and chaotic. 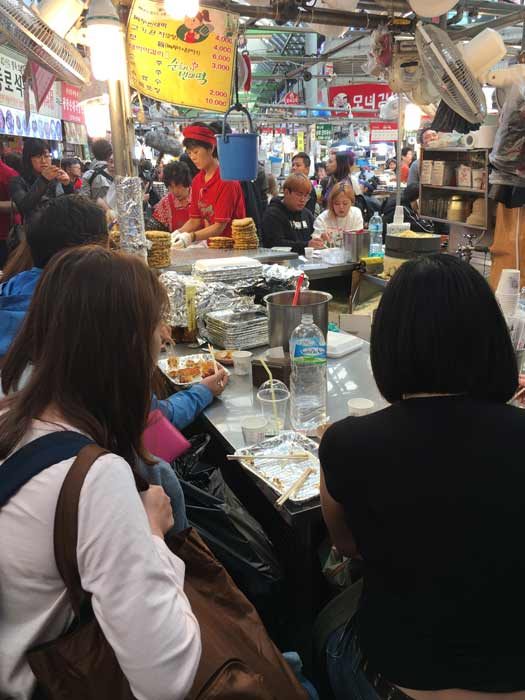 Here is a cook at a stand making mung bean pancakes, which I highly recommend as one of the best things I ate in Seoul. Of course, they are fried, so why wouldn’t they be?! The pancakes are clearly very popular as there were several mung bean stands within the food court. Myrna, one of our group, and I wanted to sit down and went to eat at one of the little restaurants that line the food court. A man was eating at the table next to us with his son. He heard us speaking English and struck up a conversation. His English was limited, but he was enthusiastic. He was finishing his lunch and offered us his some of his rice wine, which I thought was good. Next thing we knew he wanted to order us an “egg macmuffin,” as he called it. We said no, we had food coming. The server came over, and we told her no, we had enough food. Shortly after the man and boy left, the egg dish arrived steaming and bubbling. It was similar to an egg souffle. Oh my, there was no way we could eat that plus our very large pancakes. Two young women sat down, and I told Myrna I was going to offer the dish to them. She was sure I couldn’t do, but I did, and they were quite happy to take it off our hands. I just couldn’t stand the thought that a perfectly good dish of food would be thrown out. 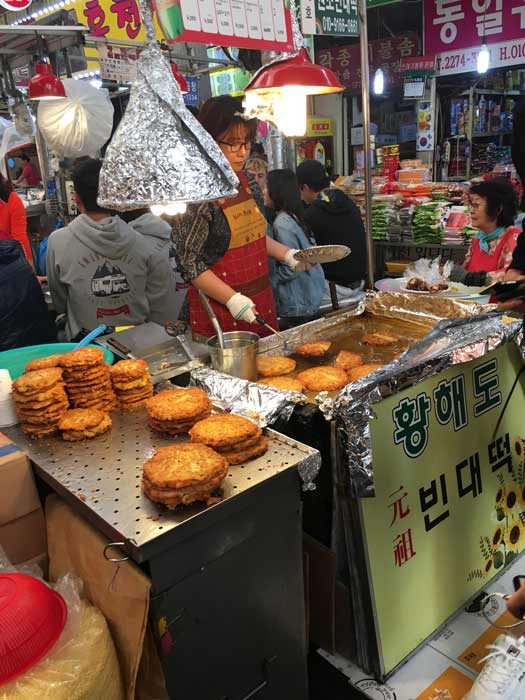 I loved the rich colors of the spices in the food shop at the market. 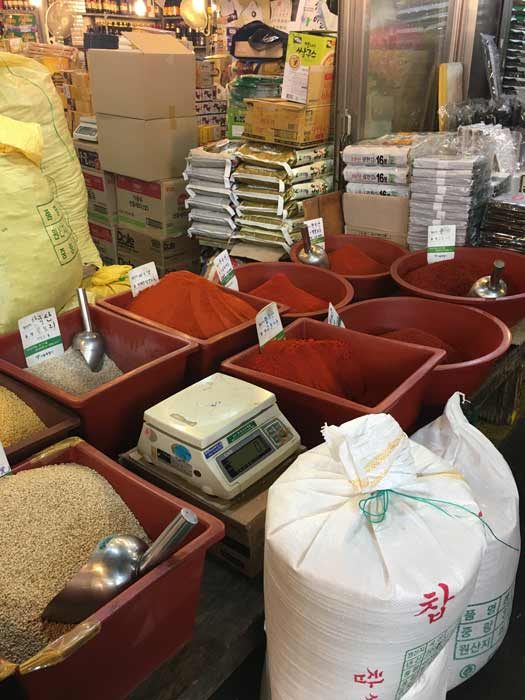 We walked back to our hotel from the Market via the Cheonggyechoen Stream.  It is eleven kilometers long and runs through downtown Seoul, passing by several important sites, including two palaces. The stream was created as part of an urban renewal project and is a restoration of the stream that was once there before during the Joseon Dynasty (1392-1910). I had read about this project in National Geographic magazine several years ago, so it was interesting to experience it in person. To walk along the stream, descend one of the a stairways. Clearly, the people of Seoul enjoy the ambiance this natural setting offers right in the middle of the city. 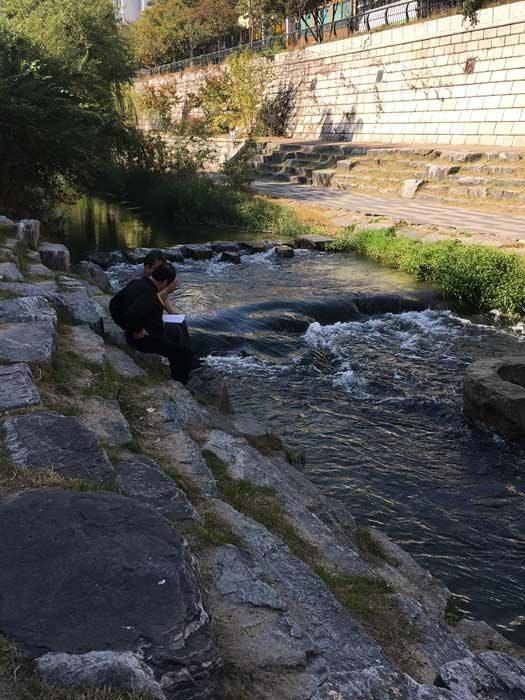 Here we are crossing the stream the only way available to get to the stairs on the opposite side which led to our hotel. 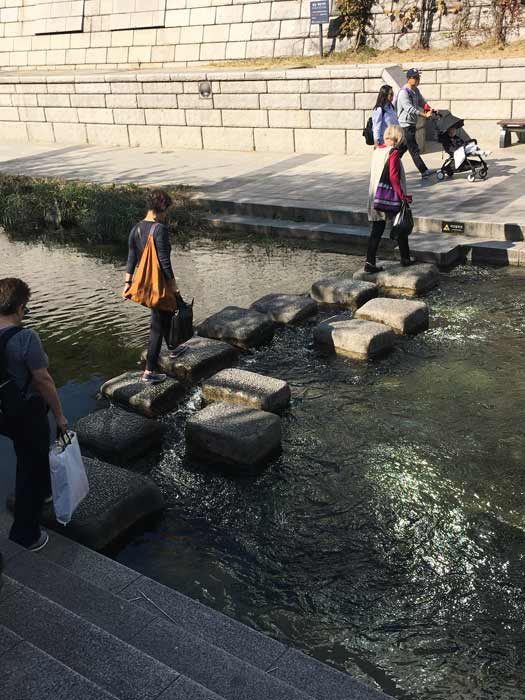 This evening we attended a concert of traditional acoustic music. Unfortunately, the audience was not allowed to take photos. Afterwards, we went to a traditional Korean restaurant, one of several, but easily the most beautiful. Here we are having just arrived. Notice members of our group scurrying around to take photos.