Deborah Stockdale is a quilter well-known in the town of Letterkenny. She’s an Californian who came to Ireland 40 years ago to pursue archeology. 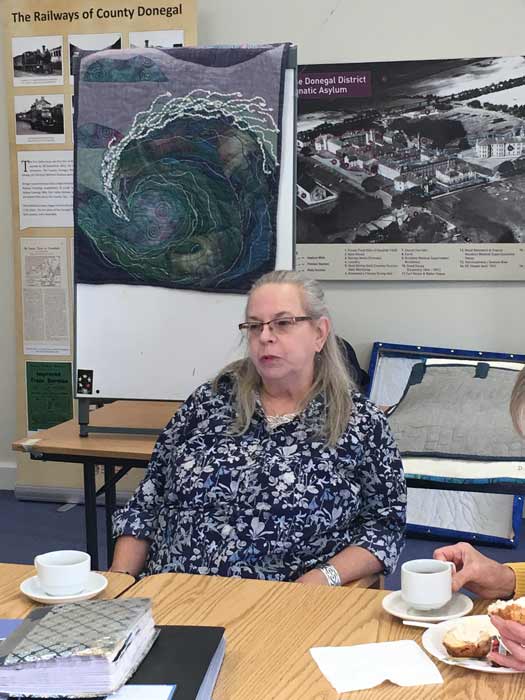 She began quilting with linen and wool tweed, because that’s what was available. 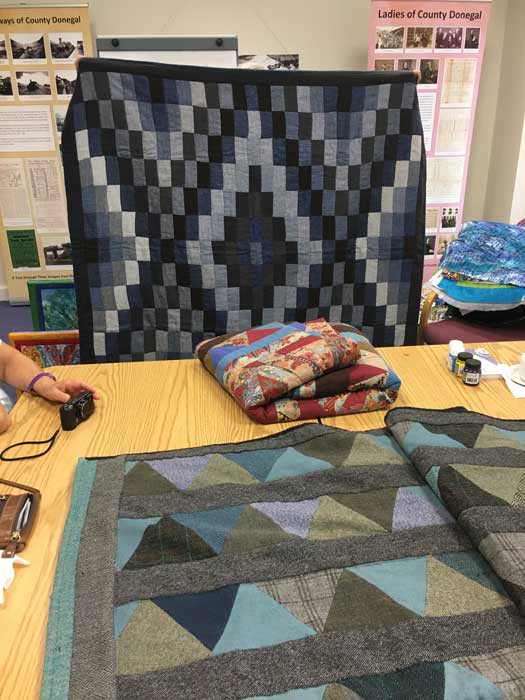 However, she’s turned to art quilting, experimenting with products and techniques, such as discharge, fabric crayons, Pentel pens, and Jacquard Dyna-flow. One of her common themes is representing microscopic organisms. We were treated to a show-and-tell of her wall hangings. Interesting side note–she continues to hand quilt. 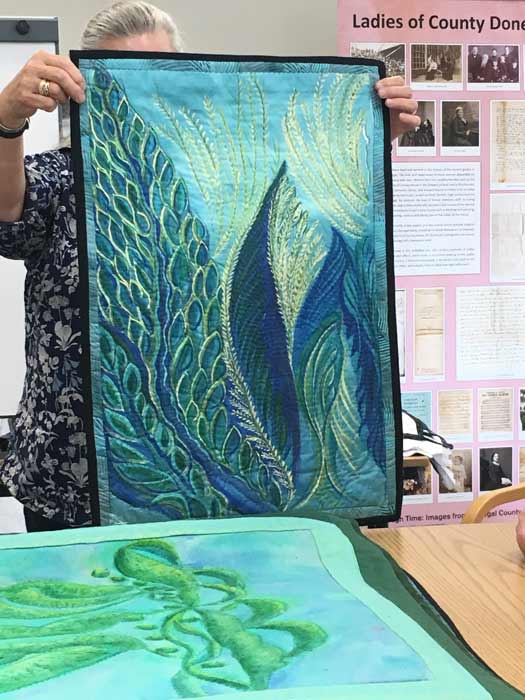 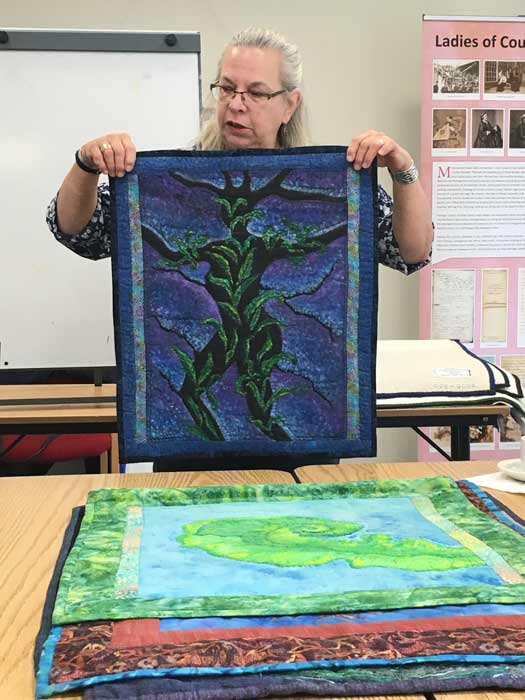 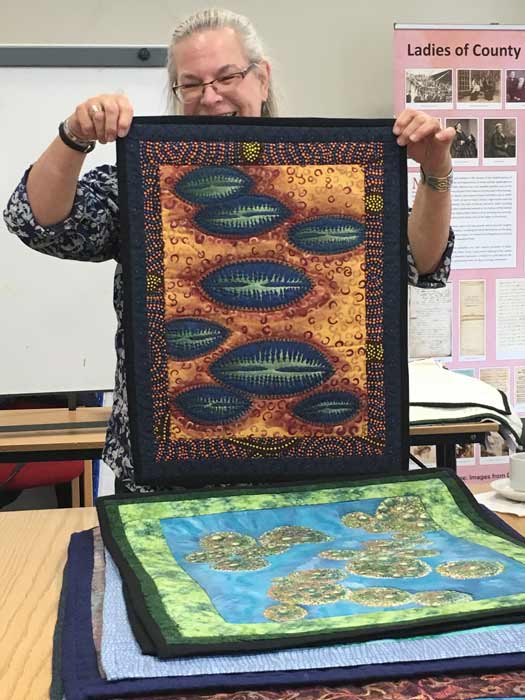 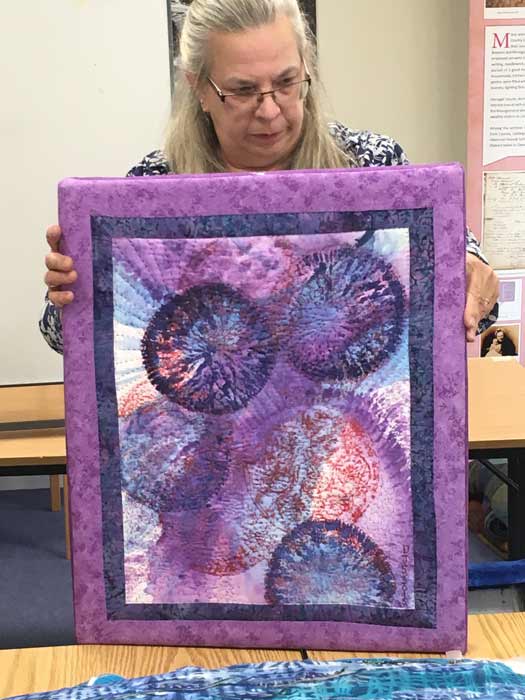 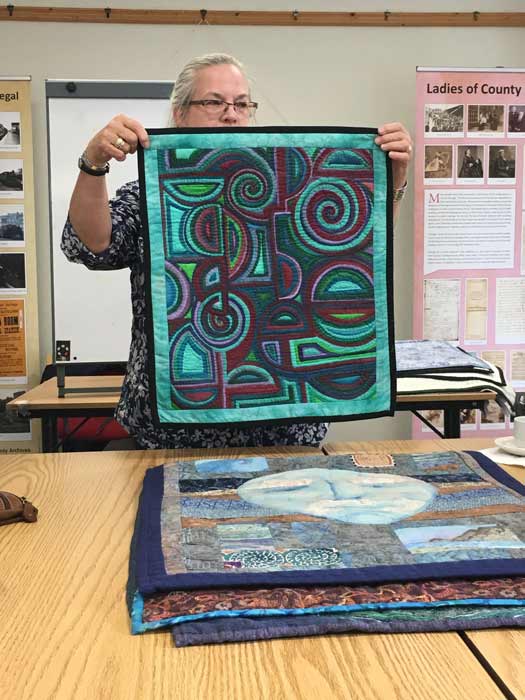 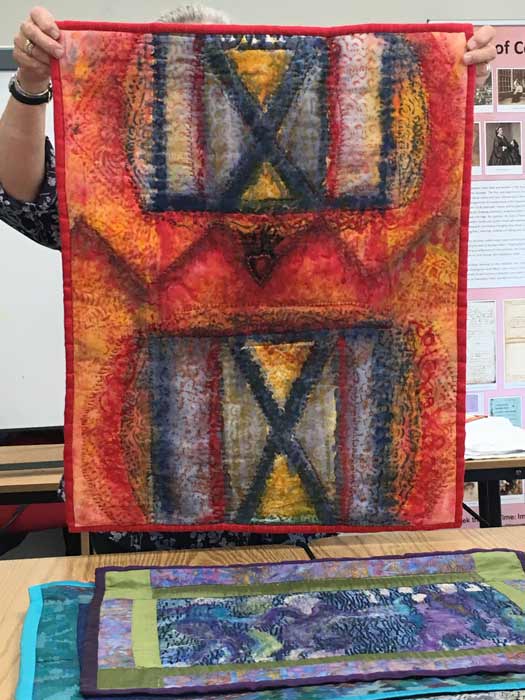 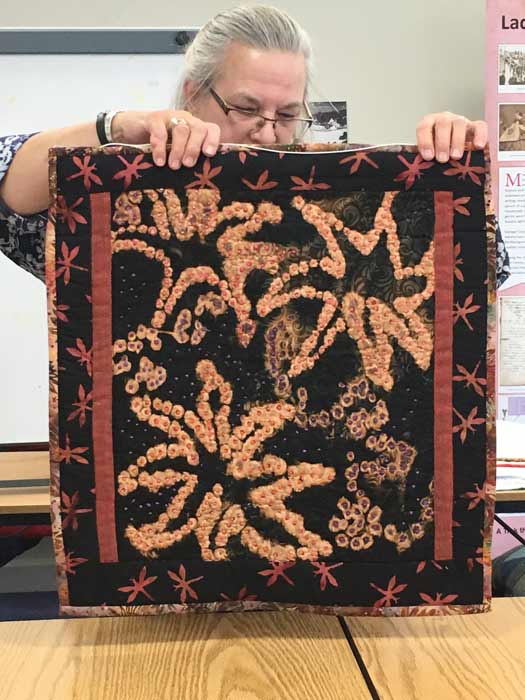 Deborah is involved in other quilting activities beyond her own. She organizes public projects. The first was an alphabet quilt whose goal was to unite diverse groups of people. Makers expressed their joy, grief, goals and religion through various letters. 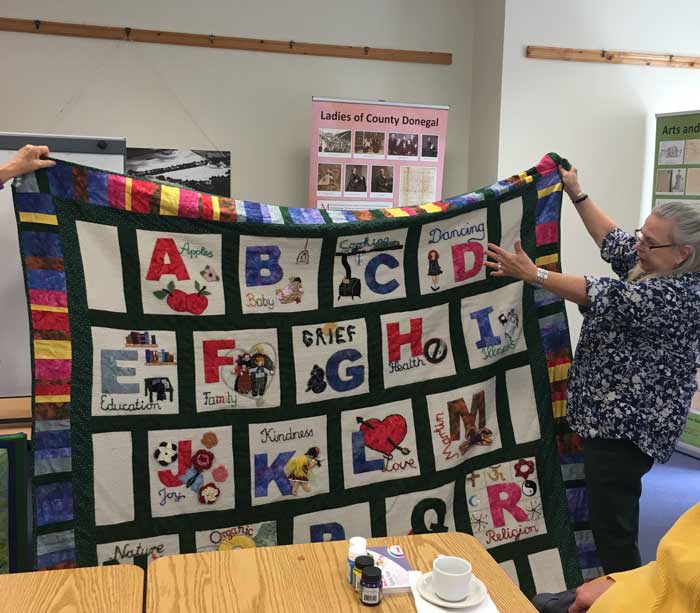 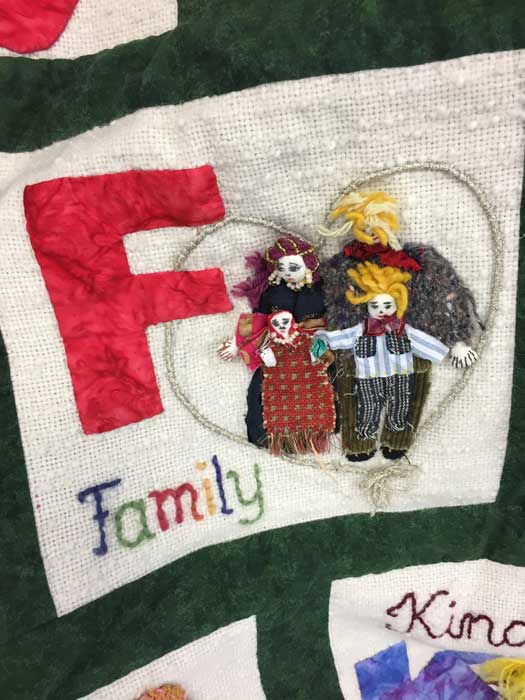 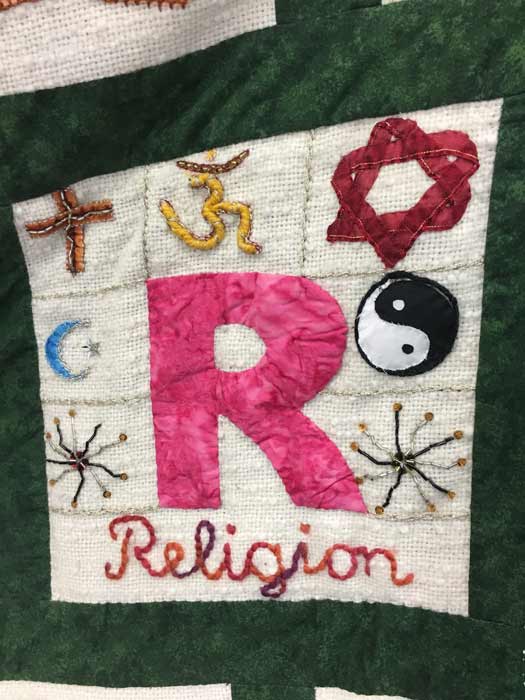 Another quilt showed the era when Scottish lords took over their vast landholdings from Irish tenant farmers and introduced Scottish sheep which did not thrive. At the bottom of the quilt, you can see the Irish boarding ships for America. Notice how the land changes from healthy green on the right to dull browns on the left. Naturally, the quilt is made with wool. 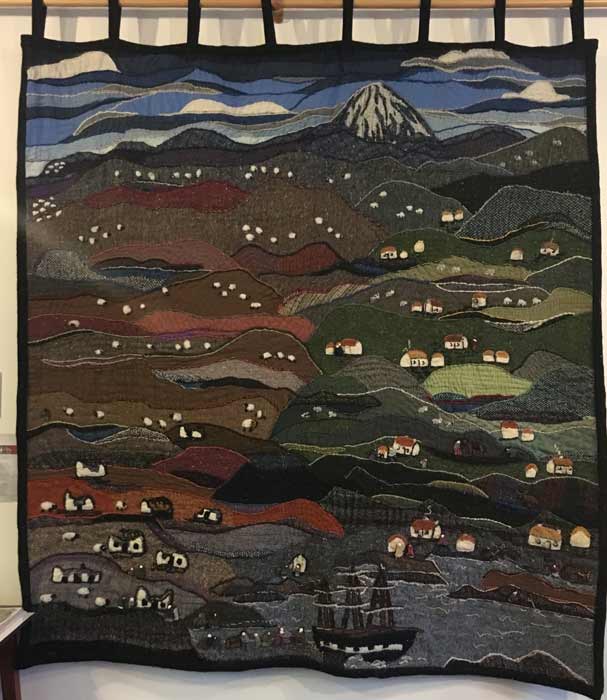 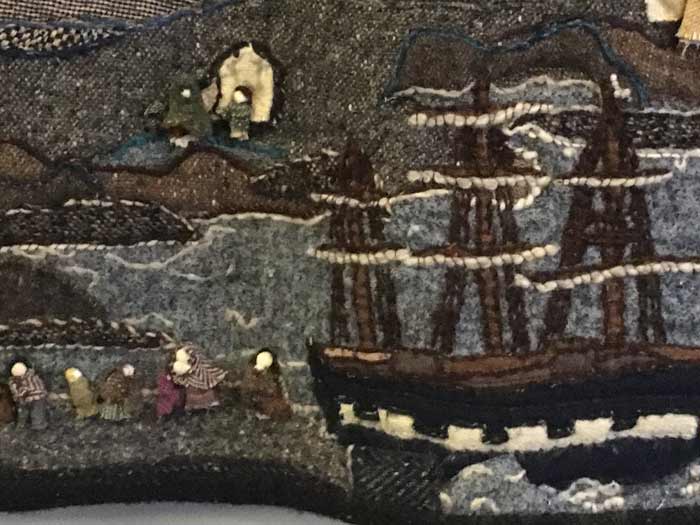 Deborah is also heavily involved with Conflict Textiles “which is home to a large collection of international textiles, exhibitions and associated events, all of which focus on elements of conflict and human rights abuses. The collection is mainly comprised of arpilleras, quilts and wall hangings. Making visible the struggle for the disappeared remains at the very core of the collection.” 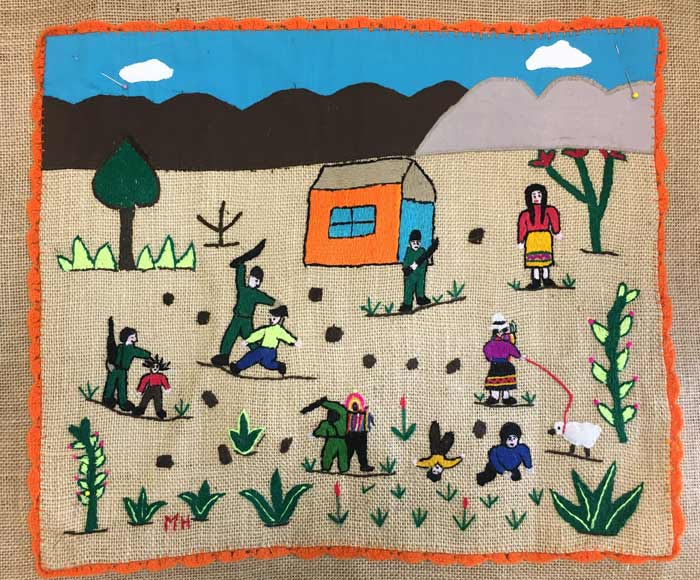 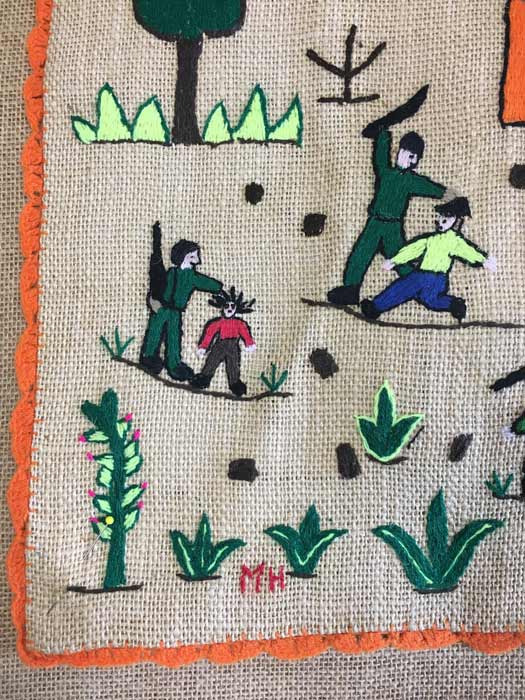 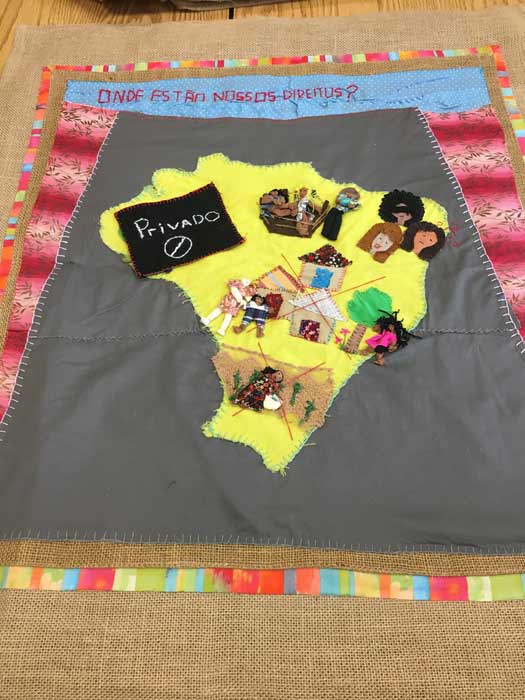 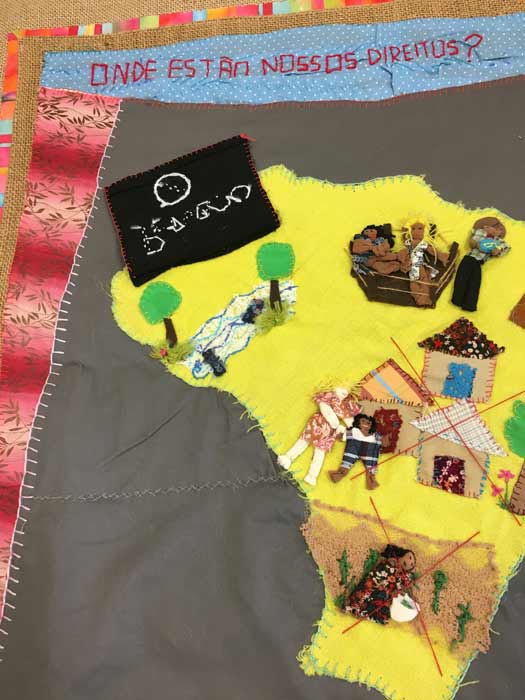 Detail showing what life was like before the strife

Lunch was next at Aromas Café located at Donegal Craft Village. I cannot say enough good things about the food at Aromas. I had fresh pasta, yum, followed by dessert–homemade, of course. The most popular is Tuscan Orange Cake. The craft village was equally wonderful with the artists working and available in their workshops. I was particularly taken with jeweler Niall Bruton where I had to decide between two pairs of earrings, and Mc Conigle Glass Studio‘s whimsical works.

If the day wasn’t full enough, we had a final stop at Salthill Gardens. 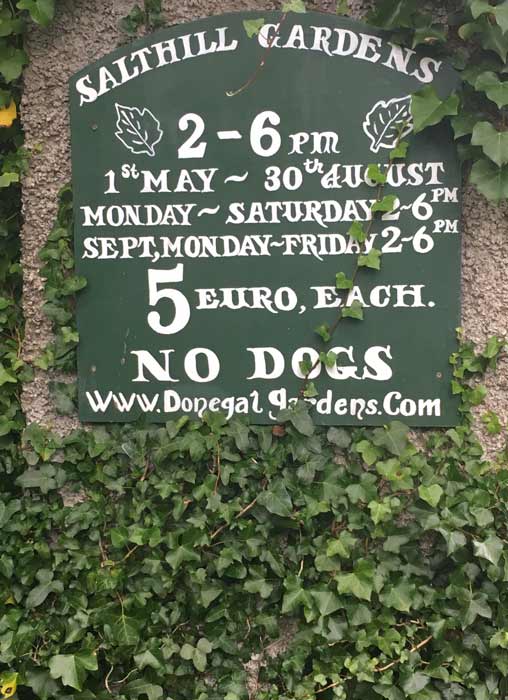 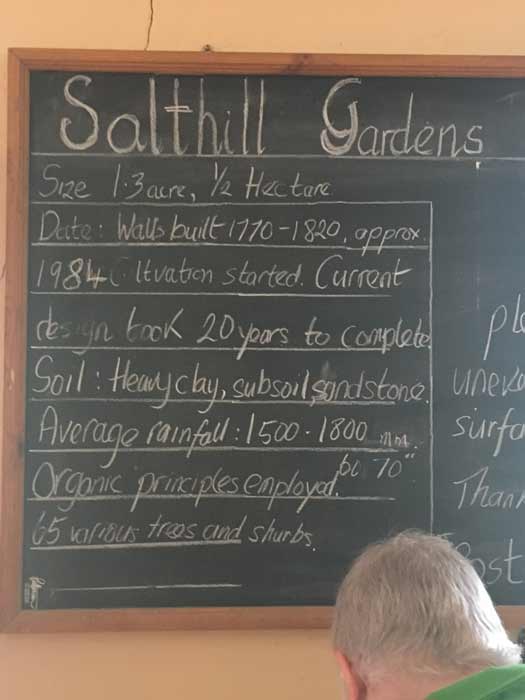 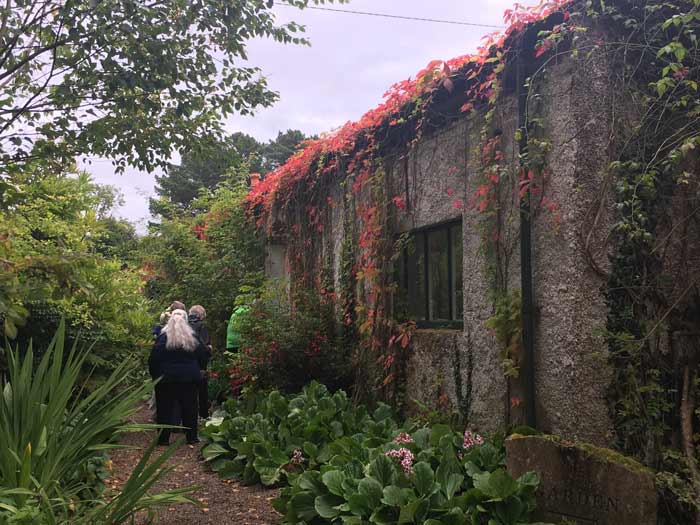 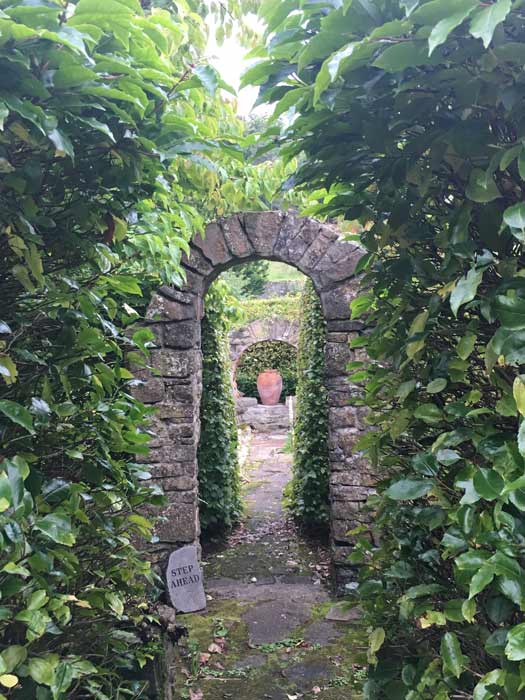 The master gardener took time away from his work to tell us about the Elizabeth Temple who has transformed the garden into its current appearance. She lives on site. 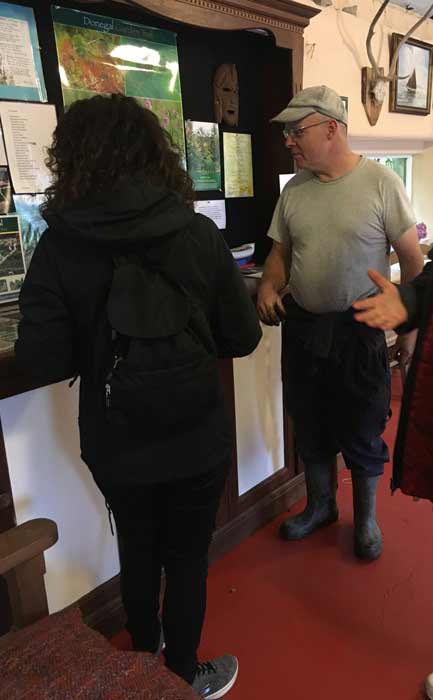 Our charming tour guide and gardener

This is her amazing view–you can see the ocean on the horizon. 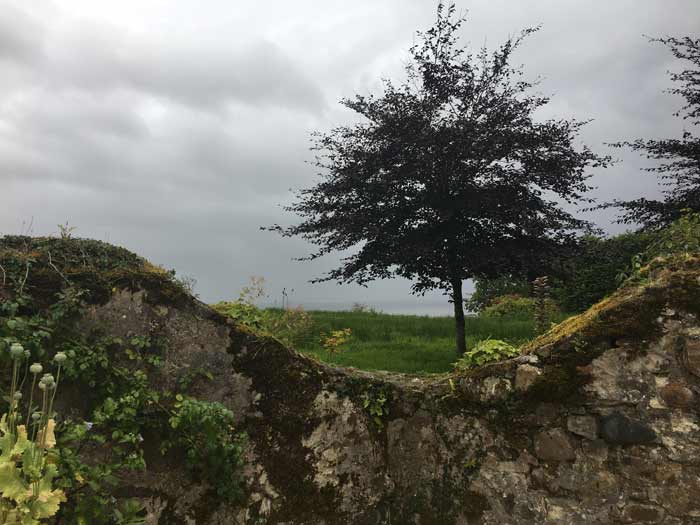