My nephew Nick and his wife Samantha had a second son on November 12th. I wanted to give the new baby something quilted, so I purchased a Zoo Quilt Panel for the top from Keepsake Quilting and backed it with a thick fleece aka cuddle fabric in an owl print to coordinate with the animals on the top. I wanted to quilt it on my longarm but wasn’t sure if the thick backing fabric would be different or difficult to handle as I had never longarmed anything other than cotton before. Fortunately, you can find any information on-line these days. I learned cuddle fabrics have a tendency to stretch so run the selvedges perpendicular to the take-up rollers. Two quilting designs were recommended, either a large meander or large swirl, to prevent the puckers and folds cuddle fabric is prone to developing. Although I checked as I quilted, I was relieved to see all was well on the back, when I took the quilt off the frame. I had enough backing fabric left over for the binding and decided to use it single fold. The cuddle fabric worked perfectly. 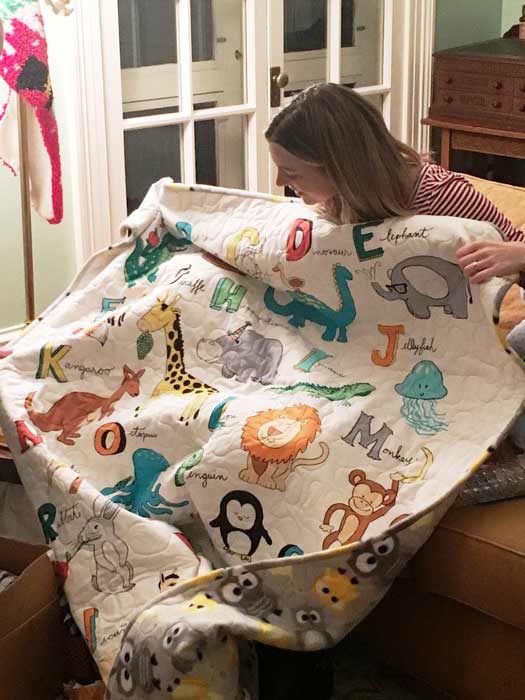 In addition, when I went to Houston in October for Quilt Festival, there was a booth called Have 2 Have It which makes “ear-resistible” puppies and bunnies using Minkie fabric. The company embroiders the animals’ ears with the child’s name and birth date. I chose a puppy. You can see the puppy is as big as the baby! I loved the way the Minkie and cuddle fabric on the quilt complemented one another.

We drew names for present for the adults. My niece Meredith drew my name and gave me three cat-themed gifts. One was a pillow which she said she made. I thought she was joking. But she was serious, much to my surprise. Can’t say how excited I am she’s getting into stitching. She and I made a twin-size bed quilt for her when she was sixteen, as well as two prom dresses. She didn’t show any interest in sewing after that. But she recently bought a Brother sewing machine at Costco. It’s an inexpensive model, but she said it actually does a lot. Yay, Meredith. May you continue on. I should add, also to my surprise, I’d like to learn to sew. I may have some teaching on my hands. 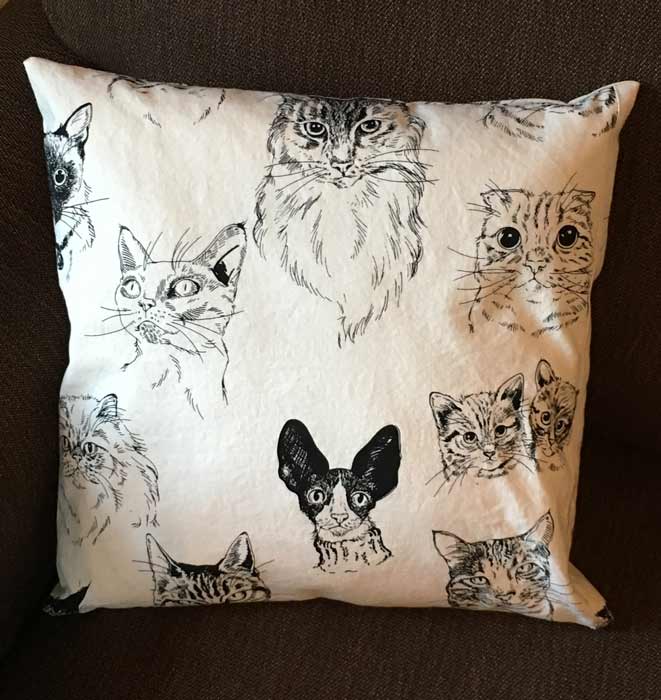