Janet Hiller of Eugene, Oregon created this piece for the International Fairy Tale Challenge, one of the few that is not representational or pictorial. Here is what she says about her work.

“In Japanese mythology Amano Iwato is the story of Amaterasu, the sun goddess, who was driven by the bad behavior of her brother Susano, the god of storms, to hide in a cave, plunging the world into darkness. To trick her out of hiding, the other gods threw a noisy party just outside of the cave, and set up a huge mirror at its mouth. Curious about the noise and laughter of the party, Amaterasu decided to take a peek, and became enchanted by her own reflection. As she stepped out of the cave the world became light once again, and the gods sealed the entrance so that she could never again go into hiding.

I have been interested in Japanese optic and geometric designs for a very long time, and wanted to capture in abstract form the moment when Amaterasu began to emerge from the back of the cave—her luminous brightness reflecting back at her.”

Janet selected just the right fabrics for the moment she chose to interpret, and I love the graphic nature of this quilt. 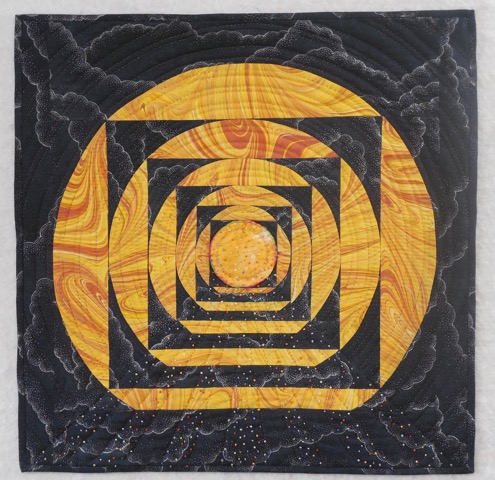